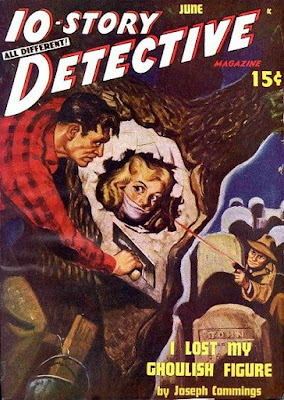 I'm not sure I've ever come across a "girl hidden inside a tree in a graveyard" cover before, but that's what you've got on this issue of 10-STORY DETECTIVE MAGAZINE, courtesy of artist Al Drake. The best-known authors inside this issue are Philip Ketchum, Joe Archibald, and Ray Cummings. There's also a story by Joseph Commings, an author who's almost competely forgotten now, but he published fairly prolifically in the mystery magazines, both pulps and digests, from the mid-Forties to the mid-Eighties, so that's a pretty long career. We were in some of the same issues of MIKE SHAYNE MYSTERY MAGAZINE. Commings' main detective was a U.S. Senator named Brooks U. Banner. There are more than two dozen stories in this series, but his cover-featured yarn in this issue of 10-STORY DETECTIVE isn't one of them. The other authors in this issue are writers I've never heard of. I do kind of like that goofy cover.
Posted by James Reasoner at 4:30 AM

Thanks, Jeff. I remember reading Commings' stories that were published in MSMM but didn't recall anything about them. I see there was a collection of the Banner stories published by Crippen & Landru a number of years ago. Don't know that I'll go to the trouble of hunting down a copy, but I might, one of these days.

I've read the Commings collection and liked it a lot; if you're an impossible crime fan, I suspect you will too. But I do have a problem with his amateur detective protagonist having a "real-life" job as a U.S. Senator.

Though I seem to recall at least one Golden Age comic book character who also doubled as Senator and as masked crime-fighter, and I have a vague memory of a 1960s (?) TV cartoon series about an ultra-powered guy called SuperPresident, both I'd say even harder to believe in.