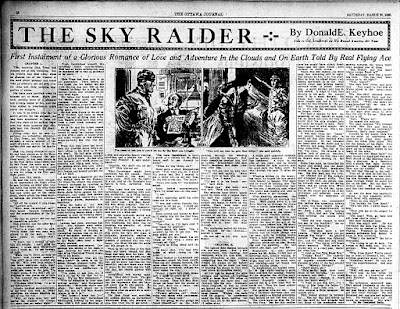 One thing that most people have forgotten or never knew is that a lot of popular fiction used to be serialized in newspapers. This was true up into the 1940s and maybe beyond that. I don’t recall seeing any serials in newspapers when I was growing up, but it’s certainly possible that such things occurred elsewhere.

THE SKY RAIDER was serialized in The Ottawa Journal and other papers in 1929. It’s the first novel by young pilot Donald E. Keyhoe, who started writing while he was recuperating from injuries suffered in a crackup in 1922. As you might expect, he specialized in aviation stories. THE SKY RAIDER is an adventure yarn about air piracy, with some elements of the traditional mystery thrown in as well. The protagonist, Dick Trent, flies for the Air Mail, a relatively new operation at the time. Dick’s not exactly a daredevil, but he’ll run some risks while he’s flying if he has a good enough reason.

The owner of this particular Air Mail service has a beautiful daughter, a ne’er-do-well son, and a government contract to deliver a quarter of a million dollars for the Federal Reserve. Dick’s best friend takes the run carrying the money. When he doesn’t show up where he’s supposed to, Dick leads the search. He finds the wrecked and burned plane and the body of his friend. The pilot wasn’t killed in the wreck, though. Dick figures out that he actually landed the plane for some reason and then was murdered by someone who met him on the ground. The money, of course, is gone.

The owner of the Air Mail service, the father of the girl Dick loves, is soon arrested for the murder and robbery, convicted, and sent to prison to await execution. Dick believes he’s innocent, and the rest of the novel is concerned with our young hero’s efforts to ferret out the truth and uncover the real killer.

For a first novel, THE SKY RAIDER is decently plotted. You’ll think you have everything figured out more than once, but Keyhoe manages to put some nice twists on the story. It’s not very well-paced, though, lurching along with some stretches that drag. Most of the time the writing is serviceable at best, reminding me of the prose in a lot of those Stratemeyer Syndicate books from that era.

It really perks up, though, when Keyhoe is writing about flying itself. You can tell he really had a passion for it. There’s a nice scene where Dick is comparing flying to riding in a train, and train travel definitely comes off second best. (I have a feeling that if E.S. Dellinger had been writing that scene, it would have been the other way around. It’s interesting that enough people in those days had an affinity for one or the other that both aviation and railroads had millions of words of pulp fiction written about them.)

Keyhoe had a long career writing for the aviation and air-war pulps, mixing in a few detective stories along the way. He also wrote the short-lived Yellow Peril pulp series, DR. YEN SIN. Then he struck gold in the Fifties with his supposedly non-fiction books about UFOs. I gobbled up all those flying saucer books when I was a kid, and I remember reading and enjoying the ones by Keyhoe. I’d never read any of his aviation stories until THE SKY RAIDER, though.

And even though it’s very old-fashioned and has its flaws, I also found it pretty entertaining. The whole novel can be downloaded in PDF format from the Age of Aces website, with the first installment to be found here. Age of Aces also publishes a number of collections of Keyhoe’s aviation pulp stories, as well as collections by other stalwarts of that genre, and I have a feeling I’m going to be buying some of them. All three of Keyhoe’s DR. YEN SIN novels are available from Altus Press and I’ll probably spring for those as well. In the meantime, you can sample THE SKY RAIDER for free, and if you’re looking for a novel that will transport you back into another era, it’s a good one.

The most recent famous examples I'm aware of were Cyra McFadden's THE SERIAL, in the SAN FRANCISCO CHRONICLE in the mid 1970s...when it was a self-conscious throwback with a modern focus...and TALES OF THE CITY by Armistead Maupin and its sequels, which followed in the same paper, and they apparently sparked a brief vogue in some other papers [WIKI mentions Tangled Lives (Boston), Bagtime (Chicago), and Federal Triangle (Washington, D.C.)].

I'm mostly aware of Keyhoe from his "nonfiction" as excerpted or reviewed in FANTASTIC UNIVERSE in the '50s...amused that he worked on DR. YEN SIN...and glad he did better work.

I've read many of his aviation stories, and enjoyed them. He was a marine pilot, I think. and to look at him you'd think he was an alien from another world. Yeah, I loved his UFO books, too.

Todd,
I remember seeing the book version of McFadden's THE SERIAL but didn't know it started out as an actual serial.

Tom,
I didn't have any idea what Keyhoe looked like, so I had to find some images. Yes, he did have a certain other-worldly look! I can imagine him in a shiny jumpsuit holding a ray gun.

GRIT, of course, was still heavy on serialized novels into the 1960s (and maybe later; I was seeing it only for a few years in those 1960s), but it wasn't exactly a newspaper.

My local paper, the Minneapolis STAR-TRIBUNE, has done one serialized novel (over the course of a dozen weeks or so) for the lsat three (I think) years. I'll admit I've not read any of them, though.

I'd forgotten all about GRIT. I used to see issues of it around, but my parents never subscribed to it. I think maybe one of my aunts did. So I read it now and then. It appears to still exist as a magazine devoted to rural living but doesn't run any fiction.