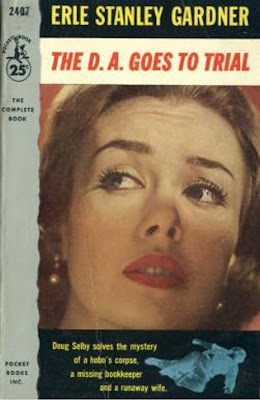 Quite a few years ago I read one of the books in Erle Stanley Gardner’s series about District Attorney Doug Selby. I couldn’t tell you which one, but I remember liking it all right despite feeling that it wasn’t nearly as good as the Perry Mason and Donald Lam/Bertha Cool novels that I’d read.

I thought it was about time I read another one, so I picked up THE D.A. GOES TO TRIAL, published in 1940 as the fourth book in the series. There’s not much point in trying to summarize the usual incredibly complicated plot. Let’s just say that it involves a dead hobo whose true identity is a mystery, a hotheaded rancher, a runaway wife, a divorce that may or may not be legal, the fingerprints of a dead man that don’t match the corpse, various cases of embezzlement and blackmail, and the return of Selby’s old girlfriend who is now a lawyer and will wind up opposing him in court. Gardner juggles all these elements until Selby finally puts them into a pattern that makes sense (I guess; sometimes it’s hard to tell with Gardner) and brings a murderer to justice.

Gardner was never known for his vividly descriptive writing, but there are some nice passages in this one about the Southern California landscape. And the plot is pretty interesting. As usual with Gardner, the second half of the book is better than the first, as the pace picks up and there’s a greater sense of urgency. Of course, the courtroom scenes, where Gardner really excels, usually come in the second half of the book, too. That’s not the case here, as the only courtroom scene is a short one lacking in fireworks, but overall the story moves along better anyway.

For me, the real problem with the Doug Selby books is Doug Selby himself. He’s a really bland, colorless protagonist, just one step up from a cipher. In this series Gardner seems to be trying to recreate the same dynamic as in the Perry Mason books: reporter Sylvia Martin is Della Street, Sheriff Rex Brandon is Paul Drake, but Doug Selby is no Perry Mason.

So I can only give THE D.A. GOES TO TRIAL a mixed recommendation. It’s entertaining if you stick with it, and I’m glad I read it, but I suspect it’ll be a good while, if ever, before I sample this series again.

(That’s my copy in the scan above. Below are covers from some of the other editions.) 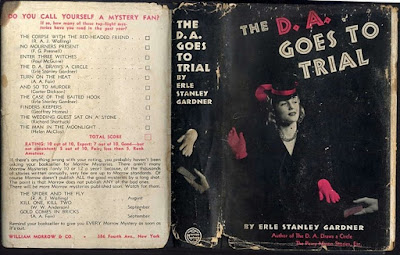 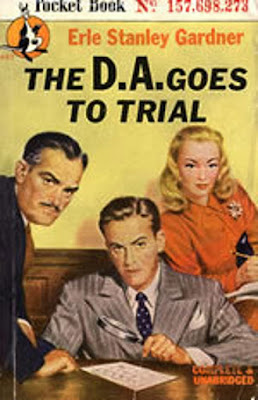 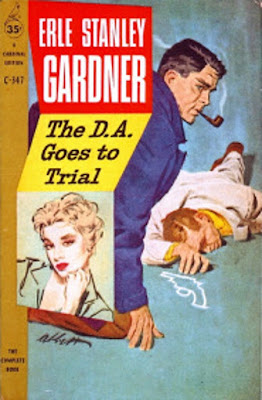 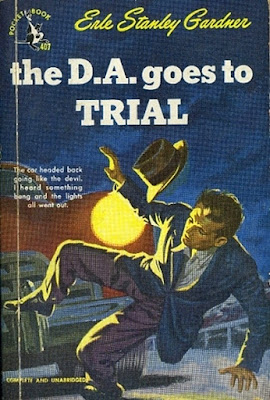 I should probably give Cool & Lam another try. I'm a huge fan of the Perry Mason books (I own them all) and I like the Selbys, but the one Cool & Lam I tried just didn't interest me. Considering their lofty reputation, it's probably my fault I didn't get into it. Any suggestions which book in the series I should try?

The first book, THE BIGGER THEY COME, sets up the Cool/Lam partnership but isn't as strong as many of the later books, in my opinion, and the characters aren't as well developed, which isn't surprising with it being the first book. And the second one, THE KNIFE SLIPPED (published a few years ago by Hard Case Crime after being lost for decades), takes the series in a different direction than it wound up going when that book was rejected and ESG wrote a replacement novel for Morrow. But I thought that replacement novel, TURN ON THE HEAT, originally published as the second book in the series, was really good so that might be where you'd want to start.

I read a few of the Doug Selbys about twenty years ago and have been meaning to get back to them ever since. My memory agrees with your assessment of Selby as a character. Despite the title of one of the books in the sereis -- THE D.A. HOLDS A CANDLE -- Doug Selby can't hold a candle to Mason or Cool and Lam. Nonetheless, I will get back to the series. Some day.

I'm reading a Perry Mason novel now. It's from 1954, a period that I think Erle Stanley Gardner did his best work. I haven't read the Doug Selby books, but all the reviews I've read universally consider them "weak."

I'm with Jerry on these. I read one and liked it well enough, though "well enough" isn't a very strong accolade. But I lie Gardner's plots, and will try this, if I can get my hands on a copy.

I've read all the DA series, and quite enjoyed them, but then I'm a big fan of Gardner, including his pulp fiction work. I've read all the Perry Masons too and most of the Cool & Lam series. Next, I plan to read MURDER UP MY SLEEVE with no expectations of it being a great book, but simply because it's by Gardner.

I ve read several of these. There was a made-for-television movie of one of them, THEY CALL IT MURDER (1971), with Jim Hutton as Doug Selby and Lloyd Bochner perfectly cast as his nemesis, sleazy lawyer A.B. Carr.

Even minor Gardner is always entertaining. Ed Gorman was a big fan of the Doug Selby books, so they work better for some readers than others. I remember watching fhe TV movie with Hutton and Bochner and still saw Hutton in my mind's eye as I read this one. I liked him as Ellery Queen, too.

I've not read any of this series. Probly about time I checked it out!

I admit to having totally forgotten the "D.A." series. Never cared much for Gardner, though I think my first mysteries, circa '46, '47 were the Bertha Cool-Donald Lamb series. Gardner made the series work with a female lead, very rare in those days. I may go back to a book or two of both series, but not "Perry Mason." Delighted with your posts.

btw, I remember seeing Flynn's "Northwest Pursuit." As kids we saw all of his movies.