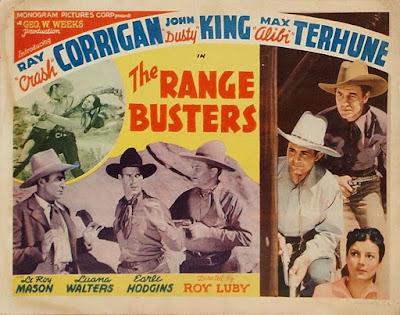 The Range Busters were Monogram's lower-budget answer to Republic's The Three Mesquiteers, with two former Mesquiteers in Ray Corrigan and Max Terhune (John King was the third Range Buster). But THE RANGE BUSTERS is also the title of the first movie in the series. The three old friends, Crash (Corrigan), Alibi (Terhune), and Dusty (King) get together to help out a rancher friend of Crash's, but it turns out the man is murdered before they ever get there by a mysterious killer known as the Phantom. But the rancher has a beautiful daughter (Luana Walters) who inherits the ranch, so of course they hang around to give her a hand and catch the Phantom.

I've seen several of the Range Buster movies, and the scripts are usually the weakest element, often making little if any sense. This one's actually not bad, though. It hangs together fairly well, and I was even mildly surprised a couple of times by plot twists. However, there are some really dubious scenes along the way, such as the one where Crash sends Alibi into an ambush so he can circle around and get the drop on the bad guys from behind. It's a good thing those bushwhackers are such bad shots, or the Range Busters would be down a man.

Overall, though, Corrigan and Terhune are likable as always, King is less annoying than usual, Luana Walters is beautiful, the stunt work is okay, and there are dependable supporting cast players such as Frank La Rue and Kermit Maynard. THE RANGE BUSTERS is an entertaining way to spend an hour if you're a B-Western fan and probably the best one in the series I've seen so far. It's nowhere near as good as the best of the Mesquiteers movies, though, such as RIDERS OF THE WHISTLING SKULL.
Posted by James Reasoner at 5:00 AM

I've only seen Monogram's Horror movies (namely the ones with Bela Lugosi) and yes, the scripts can be . . . interesting.

FWIW, the first Range Busters film is a remake — perhaps ripoff would be a more appropriate word — of DESERT PHANTOM, a 1936 Johnny Mack Brown vehicle produced by A. W. Hackel's Supreme Pictures. S. Roy Luby directed both films. The latter's script was adapted from one of E. B. Mann's pulp yarns. I haven't been able to identify the story yet, but I will. Eventually.