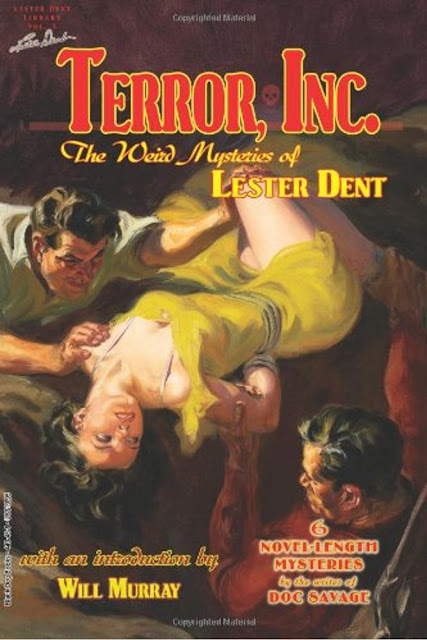 I’ve been a fan of Lester Dent’s work for more than 50 years, ever since I picked up the Bantam Books reprint of his Doc Savage novel METEOR MENACE from the paperback spinner rack in Tompkins’ Drugstore and plunked down my 45 cents for it. Since then I’ve read nearly all of the Doc Savages (I’m still saving a few for the proverbial rainy day) and a lot of Dent’s other work.

This collection, from the always excellent Black Dog Books, features six non-series novellas by Dent that were published in the pulps DETECTIVE-DRAGNET and TEN DETECTIVE ACES (a retitling of the same magazine) in 1932 and ’33, just before and after he started writing the Doc Savage series. Weird Menace stories were just becoming a sub-genre about that time, so these aren’t quite Weird Menace, but they’re in the same neighborhood. One of the main differences, as Will Murray points out in his introduction, is that the protagonists are two-fisted professional detectives, rather than the civilians who take the lead in Weird Menace stories. But the atmosphere in these yarns often borders on the sinister and creepy.

Such as the opening of the title story, “Terror, Inc.”, from the May 1932 issue of DETECTIVE-DRAGNET, in which Kerrigan, a private eye from New York who has been summoned to Los Angeles for a job, opens the door of a car where he’s supposed to meet his mysterious client, and a skeleton topples out, with a lightning bolt mark on the skull that’s the trademark of the killer who calls himself The Spark. Now, if you can read an opening like that and not want to keep going, you’re definitely made of different stuff than me.

The second story, “The Devil’s Cargo” (DETECTIVE-DRAGNET, July 1932), doesn’t have any of the macabre stuff, but it’s still a good detective action yarn, with private eye Steve Harden negotiating his way through a maze of violence involving three rival groups who are after some sort of secret. Each of the groups believes that Harden is working for one of the others, and Harden has no idea what’s going on and just wants to find out the truth and stay alive. This one moves like a rocket until the end, which admittedly isn’t quite as compelling as I hoped it would be.

“The Invisible Horde” (DETECTIVE-DRAGNET, September 1932) seems like a dry run of sorts for THE SPOOK LEGION, a Doc Savage novel Dent wrote a few years later. The plots aren’t really similar, but both involve a gang of crooks who discover the secret of invisibility. The protagonist of this one is a scientist who happens to be a former Secret Service agent. Not the most believable of characters, maybe, but there’s plenty of wild action, as you’d expect, so in this case I don’t really care.

“The Whistling Death”, from the March 1933 issue of TEN DETECTIVE ACES, like so many of Dent’s Doc Savage novels, revolves around a mysterious, grisly murder method that causes its victims to sweat blood. New York private eye Cleve Dane is summoned to Tampa for a case involving a shady financier who disappeared with five million dollars worth of gold certificates. The case turns into a wild chase through a rainy night after an embalmed corpse that keeps getting stolen. Dent really packs both action and plot into this one; it’s like a condensed novel. And maybe it’s the Florida setting and the fact that Dane seems to be two or three steps ahead of everybody else, but this story really reminded me of a Mike Shayne yarn. Which is a good thing indeed.

“The Cavern of Heads” (TEN DETECTIVE ACES, April 1933) has a great title and a headlong plot that kicks off with a box containing what appears to be a human head to the detective agency where Dave Lacy works. It’s not actually a head (not really a spoiler, since that’s established almost right away), but rest assured, heads will roll before this yarn is over. Lacy is described more like Monk Mayfair, almost as wide as he is tall, and at one point he takes off his shoes and climbs a wall using fingers and toes like Doc Savage. Dent was writing these stories at the same time as he was getting Doc’s series off the ground, and it’s fun to spot these cross-pollinations. There’s a beautiful platinum blonde, a beautiful redhead, a mysterious anthropologist who collects, yes, human heads, and a seemingly impossible murder method. The thing that’s behind it all has a Doc Savage connection, but I’ll remain mum on that since it might give too much away. This story is atmospheric and creepy as well as action-packed, and it’s just a whole lot of fun.

The book wraps up with “Murder Street”, from the May/June 1933 issue of TEN DETECTIVE ACES, and Dent’s love of both gadgets and bizarre murder methods shows up strong in this one. Detective Wes Kaine needs the gadgets to do his job and survive, because he’s undersized (although he can handle himself in a fight). He reminded me a little of Donald Lam as he investigates a case of bodies buried under recently repaired streets. Of course, there’s a connection between the murder victims which leads Kaine into a case where he finds himself in deadly danger more than once.

All six of these stories are great fun, with “The Cavern of Heads” being my favorite of the bunch. Nobody did headlong action better than Dent. This would be a decent introduction to his work if you haven’t read it before, although there are probably other things that would be better for that. But if you’re already a Dent fan, I guarantee you’ll have a good time with TERROR, INC.

There's still so much pulp I've yet to read. Sigh.