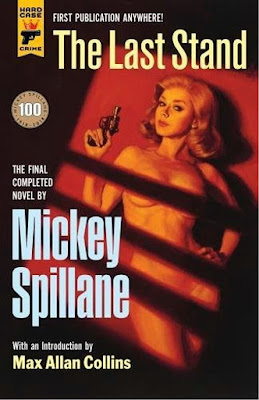 The 100th anniversary of Mickey Spillane’s birth is coming up, and Hard Case Crime is marking the occasion by publishing a new volume containing two never-before-published Spillane stories.

The first is a novella entitled “A Bullet for Satisfaction”, which appears to have been written by Spillane in the early to mid-Fifties but never edited and submitted. Max Allan Collins has worked from the original manuscript to smooth out inconsistences and bridge the different parts of the story together. The result is a lightning-paced crime yarn that’s like a Fifties paperback in miniature. The protagonist is Homicide detective Rod Dexter, who works in a medium-sized city somewhere in the Midwest. He’s trying to solve the murder of a recently elected state representative, and it’ll come as no surprise that Dexter soon finds himself up to his neck in crooked politicians, gangsters who are trying to take over the town, imported hitmen, and a number of beautiful women who may or may not be trustworthy. Dexter winds up getting kicked off the force when his investigation gets too close to uncovering the truth, but does that stop him? What do you think? That he’s gonna get his hands on a gat and continue cutting a bloody swath through the bad guys?

I think we all know the answer to that.

Spillane packs enough plot into this yarn for a full-length novel, along with plenty of action, some great dialogue, and several really harrowing scenes of violence. This is good stuff, and I can’t imagine any fan of classic era Spillane not having a great time reading it.

THE LAST STAND is the final novel Mickey Spillane completed, just a few weeks before his death. I don’t know how much editing and polishing Collins did on this one, but I suspect not much. The voice is very consistent with the other later Spillane novels I’ve read, SOMETHING’S DOWN THERE and DEAD STREET.

THE LAST STAND is a contemporary Western and more of an adventure novel than a mystery. The protagonist, successful businessman Joe Gillian, is flying a vintage World War II airplane, a hobby of his, across the desert southwest when engine trouble forces him to set down in the middle of nowhere. He’s in a bad spot, but he soon encounters Sequoia Pete, who lives on a fairly close-by Indian reservation. Pete’s horse has thrown him and run away, so he’s stranded, too. They have to walk back to the reservation, which takes several days, but they make it and by the time they do, they’ve become good friends. Then Gillian meets Pete’s beautiful sister Running Fox, and thinks maybe the bad luck with his plane wasn’t so bad after all.

Naturally enough, it’s not long before trouble breaks out involving three different plotlines: the search for a legendary fortune in gold hidden in the Superstition Mountains and the attempted murder of an old prospector; the discovery of a mysterous mineral that may have incredible scientific and military applications; and the jealousy of Running Fox’s other suitor, a massive Indian known as Big Arms, who wants to beat Gillian to death. Spillane adds some gangsters and federal agents to the mix, then weaves everything together perfectly in a fast-moving tale. It’s told in third person, rather than first, and although the stakes are plenty high, the tone isn’t as dark as much of Spillane’s earlier work. There’s even a hint of breeziness about it, which is not something you expect from Spillane, but it’s balanced by a poignant, elegeiac undercurrent of change and the passage of time and inevitable endings. And he does an excellent job of capturing the southwestern landscape as well.

THE LAST STAND is a fine novel that I thoroughly enjoyed. Along with “A Bullet for Satisfaction”, it makes this volume another real winner from Hard Case Crime. Its publication is a major event for any fan of Spillane’s work, and I give it my highest recommendation.
Posted by James Reasoner at 5:00 AM

Just reading your review makes me want to grab a gat and go over the bad guys myself.

This is one of the greatest film noir covers ever!

Looking forward to this one. Good stuff from a real gentleman. Happy 100th Birthday Mickey!