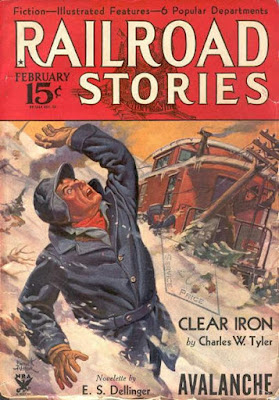 This week we're supposed to be writing about Forgotten Books by authors we haven't read before. E.S. Dellinger qualifies for me, but spoiler alert (not really), I'll certainly be reading more by him.

RAILROAD STORIES was one of the longest-running magazines to publish fiction. Beginning as a pulp called THE RAILROAD MAN’S MAGAZINE in 1906, it continued publishing stories about railroads and railroaders until January 1979, when it had long since become a slick magazine. True, there was a ten-year span in there when it was merged with ARGOSY, and the fiction published in the Seventies was mostly reprints from the magazine’s glory days during the Thirties, but still, that’s a pretty impressive record.

The star of RAILROAD STORIES during the pulp era was E.S. Dellinger, whose yarns were nearly always featured on the cover. Dellinger (1886-1962) was a former railroader himself who became a teacher and school superintendent as well as writing dozens of yarns for the pulps, beginning in 1926 with some sales to ADVENTURE. Bold Venture Press has started reprinting some of them, and I recently read a collection entitled AVALANCHE that includes three novellas, two starring engineer Rud Randall, the other featuring King Lawson, perhaps the most popular of Dellinger’s series characters. The title story, “Avalanche!”, the King Lawson yarn, appeared in the February 1934 issue of RAILROAD STORIES. The two Rud Randall stories are “The Lion Tamer”, from June 1935, and “Tornado!” from November 1935.

Dellinger covered several different phases of King Lawson’s life and career in that series. In “Avalanche!”, he’s the superintendant of a line that runs through the Rockies and is more of a supporting character in a yarn whose protagonist is a young engineer who was caught in a snowslide when he was a boy and has to battle a mortal fear of it happening again. Which, of course, it does, with a lot of lives at stake, including that of the girl the young hero loves. 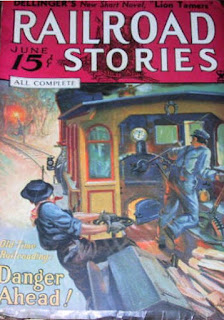 Rud Randall, the protagonist of the other two tales, works for one of the rail lines that runs through the Ozark Mountains in Arkansas and Missouri, and there’s a definite flavor of rural Americana throughout these stories. Rud is a good character, a stubborn man devoted to railroading although he also loves his wife and children. He had a bit of a reckless streak and tends to push his locomotive as fast as it can safely go—and sometimes even faster. As a result, Rud is involved with more than one train wreck in these stories, although none of them are actually his fault. But if you need somebody to outrun a natural disaster or arrive on the scene of a wrecked circus train in time to save the day, nobody is better than Rud Randall. 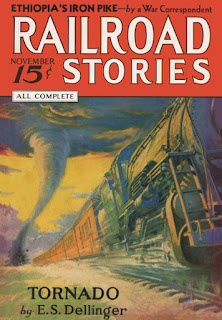 There’s nothing fancy about Dellinger’s style, but he was a top-notch storyteller and can really keep the reader turning the pages. These yarns have plenty of action in them, but they’re surprisingly character-driven for pulp tales. “Tornado!” especially is a mini-epic, spanning more than a decade in Rud’s life and containing a lot of drama about the relationship between him and his son, in between train wrecks, the Stock Market Crash, and a giant killer tornado.

I really enjoyed this book. Dellinger was writing for an audience that knew a lot about railroading, so the stories are a little heavy on the slang and technical jargon, but everything is easy enough to figure out from the context. I picked up the other collections of Dellinger stories, and I also have a few issues of the actual RAILROAD STORIES pulp that I plan to dig out. Admittedly, most modern readers won’t have much interest in stuff like this, but I like visiting a simpler time now and then, when railroads really were the lifeline of the country and country kids grew up hearing a locomotive’s lonesome whistle in the night.

I'm lazily compiling a collection of old Finnish railroad stories. It would be nice to have a translation from a pulp magazine along the Finnish stories, but seems like Dellinger is still in copyright (in Europe, that is).

I don't think I've ever read a railroad story. I just downloaded Avalanche! to my Kindle. Looking forward to dipping in soon.

Juri,
There might be some railroad stories in Western pulps published by the Thrilling Group that ought to be in public domain, or in THRILLING ADVENTURES, their general adventure fiction title. I'll have a look.

Pete,
I don't believe many readers under the age of 60 would get the appeal of Dellinger's work, but I think you will.

Most of the railroading stories found in western pulps are westerns with some train action.

Argosy has some railroading stories.
Dellinger did several railroad stories in Adventure.

I see there are now 4 volumes in this reprint series. I've just ordered them all. Thanks for the heads up!