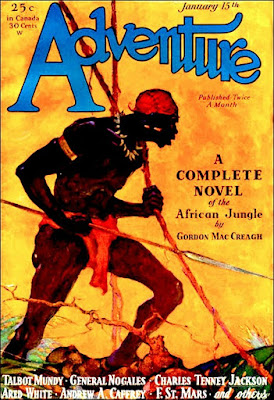 First of all, isn’t that a great title? “The Lost End of Nowhere” . . . That really makes me want to read the story, which in this case is the third Kingi Bwana yarn by Gordon MacCreagh, originally published in the January 15, 1931 issue of ADVENTURE. At upwards of 37,000 words, it’s really more of a novel. As it opens, the American adventurer named King is hired by a German university to locate a scientist who disappeared in what was then German East Africa fifteen years earlier. The university has received a letter from the missing man claiming that he has made an earth-shaking scientific discovery, but there’s no way of knowing how long ago the letter was sent or whether there’s any truth to it. At least, not without sending in King to find out the truth.

King is intrigued enough to take the job, and along with his friends and sidekicks, the Masai warrior named Barounggo and the Hottentot known as Kaffa, he sets out to find the lost scientist, who had been studying gorillas and chimpanzees. King discovers clues to an eccentric white man who “married a monkey” and disappeared into the jungle. While he’s on the trail of his quarry, he and his safari clash with a couple of different tribes and hear even more mysterious stories about the missing scientist.

What King finally finds is not only earth-shaking scientifically, it’s also a grave threat to the safety of the world. There’s a lot of blood-and-thunder action, written in MacCreagh’s slightly old-fashioned but highly effective style, leading up to a great battle that approaches Robert E. Howard or Edgar Rice Burroughs level at times.

This Kingi Bwana stories are classic, old-school adventure fiction with an air of undeniable authenticity even when they get a little far-fetched in some of their elements, such as this one. I really enjoyed “The Lost End of Nowhere” and look forward to reading the rest of the stories in the series.