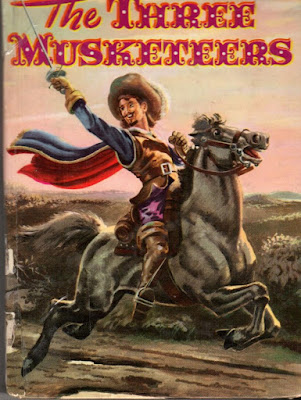 This is another of the books of my childhood. We've been watching the excellent BBC series THE MUSKETEERS on DVD (I'm sure I'll get around to doing a post about it sooner or later) and that reminded me of this volume I owned when I was a kid. Whitman published it in 1956, but it was a few years later when I bought a copy in Trammell's Dry Goods Store, one of many Whitman books I bought or read from the library over the years. (The Trammell brothers soon got out of the dry goods business and opened Trammell's Village Restaurant in the same space, next to the grocery story they owned...but that has nothing to do with this.)

Anyway, like a lot of Whitman juvenile editions of the classics, this version of THE THREE MUSKETEERS isn't the original. Instead, according to the title page, it's "Retold from Alexandre Dumas' Story". Who did the retelling? I have no idea. The author isn't given credit anywhere in the book. It's illustrated, though, by Peter Steffenson, and they're pretty good illustrations, too.

Surely everybody reading this blog knows the plot of THE THREE MUSKETEERS, so I won't go into that. I'll just say that whoever did this adaptation did a good job of it, because there are a number of scenes that have stayed with me for more than fifty years, including the opening, the numerous battles and swordfights, and the ultimate fate of Milady deWinter. Dumas deserves most of the credit for coming up with the characters and story, of course, but the "reteller" couched it all in prose that was exciting enough to keep an eight-year-old reading and pulled surprisingly few punches about the sordid aspects of the tale.

Being reminded of all this, I decided I wanted to own a copy of this particular edition again, so I found one pretty inexpensively on-line. That's a scan of it above. I may not ever get around to reading it again, but I'm glad to have it. It's not in great shape, but when you flip through those tanned pages, it smells wonderful. It smells like summer days and swamp coolers and freshly mowed grass and a just-cut watermelon that was sitting in a tub of ice for a while before you sliced it open. Some of you know what I'm talking about. And to think you can get all that from a cheaply produced kid's book published almost sixty years ago.
Posted by James Reasoner at 6:00 AM

When you say "it smells wonderful", I know what you mean. A couple weeks ago I bought some back issues of SCIENCE FICTION QUARTERLY, which was the last of the SF pulps. I no longer have the original issues that I bought off the newsstands but the smell of the pulp paper brought me back to that summer in 1956 when I did nothing but read the SF magazines. Certainly one of the happiest and most influential summers in my life.

Bill Crider and I read the unabridged version of THE COUNT OF MONTE CRISTO (translated brilliantly by Robin Buss) and loved it. Dumas was a born storyteller.

I've always been puzzled by one thing. If they're musketeers, where are their muskets?

It's been a long time, but as I recall, they use muskets in the book. They certainly do in the TV version we've been watching. There's a lot of gunplay involving both muskets and pistols.

I;m with George - THE COUNT OF MONTE CRISTO is my favorite. I can still remember taking it from the library one summer as a kid - we were allowed to take "summer books" where you could check out a book in June and return it in September - and devouring every page of it.