Tarzan: Return to Pal-ul-don - Will Murray 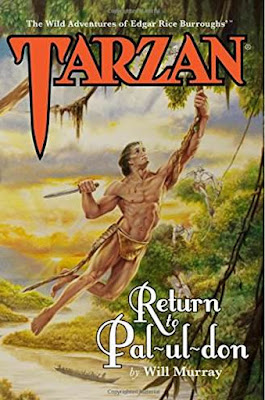 Tarzan returns in the first novel authorized by Edgar Rice Burroughs Inc. in quite a while, and Will Murray, who has done such a good job continuing the Doc Savage series, is a more than logical choice to carry on with ERB's legacy as well. The title of RETURN TO PAL-UL-DON sums up the plot: John Clayton, Lord Greystoke, has become an RAF aviator during World War II, and he's assigned to locate a British Intelligence agent code-named Ilex who has gone missing in Africa. By this time, Tarzan and the rest of his immediate family have taken the elixir that keeps them from aging and makes them practically immortal, so he's basically the same Lord of the Jungle who participated in the previous World War in Burroughs' novels TARZAN THE UNTAMED and TARZAN THE TERRIBLE (which I've written about as Friday's Forgotten Books in recent weeks).

The trail of the missing spy leads Tarzan to the lost land of Pal-ul-don, where most of TARZAN THE TERRIBLE took place. He's in a region he hasn't visited before, however, so he encounters several species of prehistoric beasts he didn't come across on his previous trip. He also runs into some of the creepiest and most formidable enemies he's ever battled, but he has help from a great new character, the elephant Tarzan dubs Torn Ear, who turns out to be one of the Ape-man's best sidekicks ever.

Everything good you're read about this novel is true: Murray does a great job of capturing Burroughs' style and pacing, the characters are interesting, the setting is vividly rendered, and the action is almost non-stop. Reading it really took me back to those long-ago days when I was eagerly grabbing every Ace and Ballantine edition of Burroughs' work I could find on the spinner racks. If you remember that time, or even if you discovered Burroughs more recently, you need to check out RETURN TO PAL-UL-DON. It gets a very high recommendation from me and makes me wonder...is there a chance we'll get a new John Carter novel one of these days?

This book has been on my radar ever since I heard about it. The only I'm going to do first is read Tarzan the Terrible.

Looking forward to reading this when I get a chance

I would read Tarzan the Untamed before Tarzan the Terrible, since the two are basically one long two-part story.

I remember when Ballantine was publishing Tarzan and John Carter, and Ace was publishing Pellucidar, Carson of Venus, and The Land That Time Forgot. Both had editions of Tarzan At the Earth's Core.