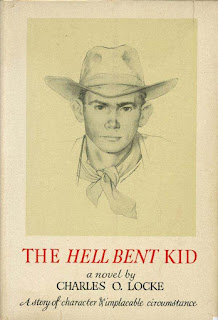 THE HELL BENT KID by Charles O. Locke was picked as one of the top 25 Western novels of all time in a poll of the Western Writers of America a while back. I wouldn't go anywhere near that far, but it is an interesting book. Originally published in hardback by W.W. Norton in 1957 and in paperback by Popular Library a year later, it's the story of a young Texas cowboy named Tot Lohman, who accidentally kills one of the sons of a powerful rancher during a fight at a dance and then has to go on the run to escape the family's vengeance. He tries to reach his father over in New Mexico Territory but runs into a considerable amount of trouble along the way before finally being cornered by his enemies. 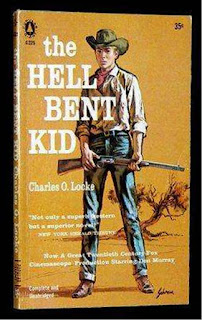 The plot is pretty typical stuff, but what makes THE HELL BENT KID interesting and has won it sort of a cult following is the way it's told, in a series of letters and statements by some of the people involved, plus a long, first-person narrative by Tot Lohman himself, all of which are delivered in a formal, slightly stilted style that's probably fairly representative of the way people really talked and wrote in those days. It's a bit reminiscent of the TV series DEADWOOD, although not nearly as profane, of course. Accurate or not, though, I found it a little annoying and that's one reason I didn't enjoy this novel as much as others have. The story moves right along at a nice pace, though, and there's no denying that the ending is quite powerful.

There's a new e-book edition of THE HELL BENT KID available, and if you enjoy Westerns that are a little more on the literary side, you should check it out.

I also saw this on that top 25 Western novels of all time poll and was scratching my head after I read this novel. There were a lot of great Westerns not on that listing what were head and shoulders better than "The Hell Bent Kid." I guess we all could name a few.

Regardless of where it sits in someone's ranking, KID is a fine novel, recommended reading, and it was turned into an excellent film, FROM HELL TO TEXAS.

I liked this a great deal.