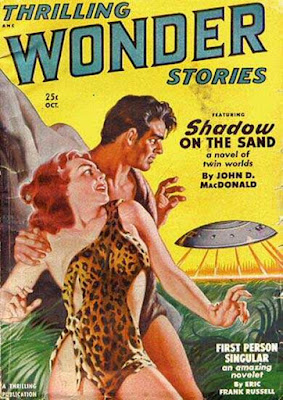 I'm well aware that my brow is on the low side, but dang, I love this stuff. An Earle Bergey cover and stories by John D. MacDonald, Eric Frank Russell, Sam Merwin Jr., Walt Sheldon, William F. Temple, and Robert Moore Williams. I'd read that. And enjoy it.
Posted by James Reasoner at 5:30 AM

I love the Bergey covers also. He died soon after this cover while taking a stress test in his doctor's office. He was around 50 years old.

Many of the SF readers kept asking editor Sam Merwin why he used such risqué covers and his response was simply that it was not his decision. The publisher's art director made the cover art decisions.

Love the cover and would love to read the contents.

Bill, is the JDM story in that Gold Medal collection of his SF stories? I don't think I've ever read it, and I ought to. I read the two SF novels of his that Gold Medal published, WINE OF THE DREAMERS and BALLROOM OF THE SKIES, and although it's been many years, I recall that I thought that were okay but didn't really like them all that much. I did like THE GIRL, THE GOLD WATCH, AND EVERYTHING, which is borderline SF, I guess.

Everything I've ever read by Russell was really good.

Russell deserves to be better remembered today. He was every bit as good as his peers.

I figure that if the risqué covers helped TWS survive that is fine with me, also I happen to like the covers.

I'm with Barry on this one. Sure, sure, the writers are all great blah blah blah but I'd buy that mag off the stands even if I couldn't read. And I'd find a way to meet that jungle gal. Thanks, James, for pepping up Sunday morning !

I looked to see if "Shadow in the Sand" is in JDM's collection of Sci-Fi stories Other Times, Other Worlds. It's not in that collection which is too bad. But while looking through Other Times, Other Worlds I found a story called "But Not to Dream" by MacDonald originally published in Weird Tales May 1949. According to the quickie intro (probably by Martin Greenberg) "But Not to Dream" contains "one of the bitchiest women in Science Fiction" which made me laugh.

Per the isfdb.com , "Shadow on the Sand" was never collected in a JDM book. It was reprinted in the retrospective 1957 and 1963 WONDER STORIES annuals (magazine format, but after TWS itself had ceased; I think they were protecting the title trademark), and was anthologized once -- in a 1972 Lancer pb, STRANGE TOMORROWS; ed. Robert Hoskins. / Denny Lien