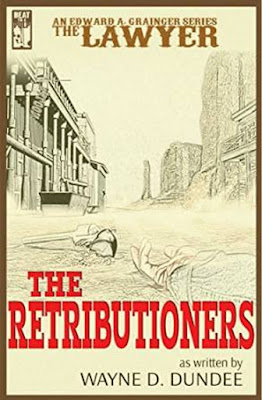 THE RETRIBUTIONERS is the second entry in the Lawyer series, created by Edward A. Grainger and written by Wayne D. Dundee. Like the first volume, STAY OF EXECUTION, this is a taut, gritty, well-written Western yarn.

The title character is J.D. Miller, a successful and respected attorney before the murders of his wife and children send him off on the vengeance trail to track down their killers. In THE RETRIBUTIONERS, Miller's search leads him to a small town in Texas just as a gang of bank robbers blow up the jail to rescue their leader who was captured in an unsuccessful raid a few days earlier. One of the men Miller is seeking is a member of the gang now, so there's no question that he'll go after them. He finds himself with an unexpected and somewhat unwanted ally in the person of the black former deputy who was the only lawman left alive in the settlement. Both of them are after retribution for those they've lost, hence the title.

Dundee's storyline alternates between The Lawyer and his temporary partner and the outlaws they're after, who still plan to return to the settlement and clean out the bank. There's plenty of hardboiled action, and the story just rockets by. The Lawyer is a compelling character, and his latest adventure makes for a fine tale. With luck it'll take him a while to track down all the men he's after, because that means we'll get more of these exciting tales to read. Highly recommended.

Posted by James Reasoner at 8:27 AM

Your posting intrigues me, so I will be looking for this book. Also, I have enjoyed visiting and browsing through your fine blog. Now, though, may I be bold enough to change the subject and invite you to visit my blog? I am a retired federal government court reporter and paralegal, and I am an avid reader and reviewer of crime, detective, mystery, espionage, and historical fiction; the new edition of my blog, "Crimes in the Library," is where you will able to find regularly posted book reviews and commentary. Here is the address: http://crimesinthelibrary.blogspot.com/ I hope you will stop by and comment often. Thanks, Harper