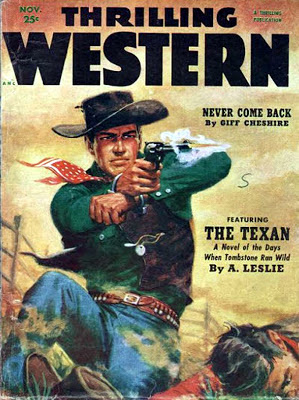 I like this cover. Nice sense of action to it. I don't know who painted it, but I think I've seen it on at least one other Western pulp from the Thrilling Group, which wouldn't be surprising because they often reused covers. I've read an expanded paperback version of "The Texan" by Leslie Scott writing under his A. Leslie pseudonym. There are also short stories by Giff Cheshire, Del Rayburn, and William L. Jackson.
Posted by James Reasoner at 7:00 AM

Certainly, under Sam Merwin, Samuel Mines and (at the very end) Alexander Samalman (and with a few codas over the next decade or so, edited by James Hendrys), the Thrilling sf titles (THRILLING WONDER STORIES, STARTLING STORIES, FANTASTIC STORY MAGAZINE...and that very late WONDER STORIES) were impressive, solid magazines...was that the way to bet it with the Thrilling Group's other titles?

James Hendryx, that is. (Not Jimi, though there's a obvious recursive story in that, too.)

I think the Fifties Western pulps from the Thrilling Group, which ended in 1958 except for RANCH ROMANCES and the occasional reprint "annual", were very good overall. Jim Hendryx Jr. edited most of them. The tone tended toward the hardboiled Western, even in some of the Jim Hatfield novels in TEXAS RANGERS (the ones by Peter Germano).

Jimi Hendrix editing a Western pulp sounds like a story that Howard Waldrop should have written.

Todd Mason in the second comment above brings up the interesting question about the quality of THRILLING WONDER and STARTLING STORIES under the editorship of Sam Merwin and Sam Mines during 1945-1954.

I would say that these two titles were the best in the Thrilling Group's stable.

The other titles just don't have the same reputation. THRILLING WESTERN never reached the higher standards of Popular's STAR WESTERN and DIME WESTERN or Street & Smith's WESTERN STORY. Also WEST during the Doubleday years of 1926-1934 was a high quality western fiction magazine.

THRILLING ADVENTURE was quite far below ADVENTURE, SHORT STORIES, BLUEBOOK.

THRILLING LOVE was hopeless against the powerhouse LOVE STORY edited by the great Daisy Bacon.

However, at a recent PulpFest, I did recently talk with Michelle Nolan about Street & Smith's SPORT STORY and she made me consider the possibility that THRILLING SPORT and the other Thrilling Group sport titles were of more interest than SPORT STORY.

This is a subject that needs more discussion.

Margulies and his editors definitely had their own stable of writers they went back to again and again, led by Leslie Scott, Tom Curry, and Walker Tompkins. You rarely if ever saw stories in a Thrilling Western pulp by Walt Coburn, Tom Roan, T.T. Flynn, H. Bedford-Jones, etc. But if you liked the writers that Margulies used -- and I do -- you could count on most issues being entertaining, but I agree they seldom approached the overall quality level of the Western pulps from Popular and Street & Smith.

As far as their detective pulps go, I have a soft spot for The Phantom Detective and like some of the other series characters okay, but overall I've found the Thrilling detective pulps to be pretty bland. Of course, the same charge is sometimes leveled against their Western pulps. All a matter of perception, I suppose.

I don't think I've ever read a sports pulp. I really should.

I've always been puzzled as to why more collectors don't collect the sport pulps. Afterall sports are very popular. Michelle Nolan has written a book on the subject of sport pulps and it should be published by McFarland Books in 2013.

Besides being interested in pulp magazine, I am fascinated by sports and buy a fair amount of sports-fiction magazines. My attraction to sports pulp magazines is somewhat secondary, though, in sense I read them to understand how people felt about sports, much the same way I might read an old Sporting News. Then, of course, there are the covers, which are marvelous peaks into the past, especially some on the Merriwell novels, published by Street & Smith.

Of all the genres that were featured in magazines, sports-theme fiction seems the most mainstream and realistic--whereas we all have probably seen a home run, few have seen a shoot-out on Main Street. I think the then-contemporary reader got the sense that he was looking into the life of the type of person who also held his interest in the newspaper sports page. Science fiction readers began gathering in their clubs and conventions in the 1930s while sports fiction readers got together more frequently long before then at sporting events.

The name “Street & Smith” still lingers on an occasional sporting annual. That company’s importance to the 20th Century may be how it mirrored and shaped people’s perception of sports, going from the Ivy League collegial sports at the end of 19th Century with the Merriwell series to the more hardscrabble life of professional athletes in Sport Stories to semi-idolatry of its factual sports magazines post-World War II. It is reasonable to speculate that sports fiction magazines might have been the most acceptable genre found in the barber-shop pile of magazines to be read while waiting when one considers the near universal appeal of sports.