Forgotten Books: The Shudder Pulps: A History of the Weird Menace Magazines of the 1930s - Robert Kenneth Jones 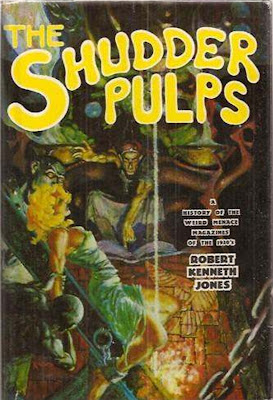 I've mentioned the Weird Menace pulps a couple of times recently, and that prompted me to pull this book down from my shelves and read it. Originally published by FAX Collector's Editions in 1975, a reprint edition is still available from Wildside Press.

Jones does a great job of covering the history of this fascinating sub-genre, starting with Popular Publications changing the direction of DIME MYSTERY from traditional mystery reprints to original Weird Menace yarns. Leo Margulies, editorial director of Ned Pines' Thrilling Group of pulps, gets a chapter to himself for his creation of THRILLING MYSTERY, which provided direct competition to Popular and DIME MYSTERY. From there Jones explores all the other publishers in the field and also provides a great deal of information and critical analysis about the writers who were featured in the Weird Menace magazines. I learned several things I'd never run across before, including the fact that four prolific pulp authors - Hugh B. Cave, Arthur Leo Zagat, Wyatt Blassingame, and John H. Knox - lived in a tiny fishing village in Florida at the same time. Million-words-a-year man Arthur J. Burks gets a whole chapter to himself.

Being a writer, I love this kind of stuff. I'm always interested in learning about how other writers lived and worked. Jones talks a great deal about the different themes used in the Weird Menace pulps and how the best writers learned to get around the formulas dictated by the editors and craft many excellent, unusual stories.

After a run of about seven years in the 1930s and early 40s, the Weird Menace pulps faded away, a development that Jones writes about as well. His respect and affection for the genre shows through and makes THE SHUDDER PULPS a fine piece of pulp history. If you're interested in such things, you need to check it out. I had a great time reading it.

One interesting side-note: in his acknowledgments at the front of the book, first published 37 years ago, remember, Jones thanks none other than Walker Martin, one of the leading pulp fans in the world and frequent commenter on this blog. I got a kick out of that, too.
Posted by James Reasoner at 6:00 AM

I agree that THE SHUDDER PULPS is one of the best books ever written about the pulp magazines.

Concerning my connection with the book almost 40 years ago, originally it existed as only a few serialized installments in a pulp fanzine published by Fred Cook, called BRONZE SHADOWS. I first read this early version in the early 1970's and immediately started a correspondence with Bob Jones.

The theme of every letter I wrote him was that this long article had to be expanded and published as a book. At first Jones had no real interest in doing such a project but my nagging must of worked because to shut me up he eventually managed to get the book published.

We then continued a long correspondence which developed into a real friendship and he even attended a few Pulpcon conventions. He also published an excellent pamphlet on ADVENTURE MAGAZINE.

I still have many of his letters discussing various issues of ADVENTURE, SHORT STORIES, and ALL STORY, that we were both reading. Unfortunately he is no longer with us.

Terrific stuff, Mr. Reasoner! I enjoyed reading about WEIRD MENACE as well as the trip down memory lane by you and Walker Martin.

Well, it should also be noted that "shudder" never went altogether away...while the shudder titles folded or changed tacks (DIME MYSTERY), John Knox continued to contribute (relatively sane) shudder to DETECTIVE STORY MAGAZINE, where Daisy Bacon seemed determined to have as wide an array of crime fiction as was possible...and I'm surprised that that was Knox's real name, for a variety of reasons (some making it not too unlikely that his parents might've dubbed him so). Shudder certainly boils under and over in the 1950s, in "men's sweat" magazines and in purer quill eventually in WEB DETECTIVE/WEB TERROR and a few other titles up through webzines of the present day...

Robert Kenneth Jones wrote quite a lot for ECHOES also. I remember his short essays in BRONZE SHADOWS when I first entered pulp fandom. Bob Jones, Nick Carr, and so many others stood out as experts in the field of the pulp magazines back then.

The covers of the men's adventure mags certainly seem to be influenced by the Weird Menace pulps, with the addition of Nazis as the primary torturers instead of mad scientists, hunchbacks, etc. Of course that's not really a surprise since some of the same artists were involved in both genres, such as Norman Saunders and Rafael De Soto.

I wasn't aware of this one. I'll have to snag a copy. Thanks for the tip, James.

Many hackneyed weird menace stories also appeared in Spicy Mystery Stories,but I did not include any in my compilation called The Best of Spicy Mystery Vol. 1 published by Altus Press. As a reader, I feel cheated when I read the supernatural goings on get explained away as devious machinations by human villains.

Just ordered a copy of this! Been wanting to read it for years.