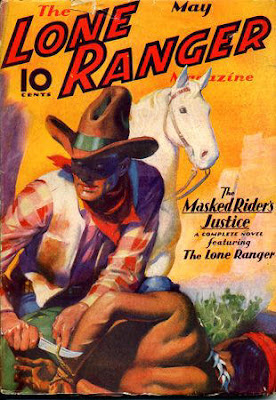 Earlier this week in my comments on the great new collection UNMASKED from Black Dog Books, I mentioned the pulp magazine devoted to the Lone Ranger. Here's the cover from the second issue of that pulp, which features the story reprinted in UNMASKED. The art is by H.J. Ward. The Lone Ranger novel takes up most of the wordage inside, but there are also short stories by Claude Rister, Lawrence A. Keating, and Frank Kavanaugh, an installment of a serialized biography of John Wesley Hardin by Chuck Martin, and an assortment of articles, features, and columns, including the "Lone Ranger Stamp Page", whatever that was. As popular as the radio show was, and as much other merchandising featured the Lone Ranger, I'm surprised the pulp magazine was unsuccessful. Maybe the fact that THE MASKED RIDER, a pulp series featuring a character clearly inspired by the Lone Ranger, was already being published had something to do with it. In fact, one of those Masked Rider stories, "Outlaw of the Red Hills", was written by Lawrence A. Keating, who has a story in this issue, making one more connection between the characters.
Posted by James Reasoner at 7:00 AM

I suspect who the publisher was had a lot to do with the magazine failing. Trojan publications, or whatever title they were using at the time. They just weren't set up to publish a legitimate magazine. If it had been done by Popular or Street and Smith I'm sure it would have lasted longer.

Beb is right. I've often thought how could a magazine called THE LONE RANGER fail? Such an interesting iconic figure, who was familiar to all kids.