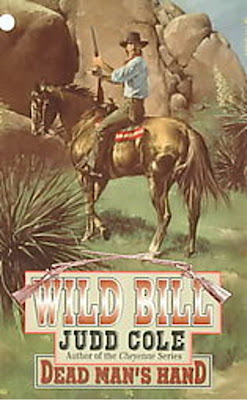 This is the first in a series of totally fictional adventures starring Wild
Bill Hickok, published a few years ago by Leisure. The author, Judd Cole, is probably really a New Orleans writer named John Edward Ames, who also wrote the Cheyenne series under that name.
The gimmick, at least in this book, is the old chestnut about a young
reporter from back East tagging along with Wild Bill in order to write a
series of articles about his adventures. It works pretty well in this case
because the reporter, Joshua Robinson, is such a likable character. In
fact, everybody in the book except the villains is pretty likable. Wild
Bill is a little crusty, but he takes Josh under his wing and a real
friendship develops between the two.
As for the plot, Wild Bill is hired by Allan Pinkerton to guard an eccentric scientist who has invented a machine that makes ice. Business rivals want to kill the scientist and steal the secret of his invention during a cross-country train trip intended to show off the newfangled contraption. Wild Bill not only has to deal with that but also with a lovesick Calamity Jane, who has been chasing him around the country determined to marry him.
All this is every bit as silly as it sounds. The book is also crammed full of historical inaccuracies and anachronisms. It's enough to drive anyone who takes Westerns seriously a little nuts. And yet, I enjoyed it quite a bit. The author writes with such enthusiasm and is clearly having so much fun with what he's doing that I was willing to forget about accuracy and accept the setting as some sort of bizarre alternate universe West. I intend to find and read the rest of the books in the series, and I can recommend this one to anybody who is willing to put tongue firmly in cheek and not expect anything too realistic.
Posted by James Reasoner at 6:00 AM

Martha "Calamity" Jane Canary was an old - well, middle aged - drunk who loved to claim she was Hickok's one true love - though she blew into Deadwood at least a year after his death (and Hickok was happily married to Agnes Lake then)

Hickok never did much beyond scouting for the army and then taking on a series of town marshal jobs, padding his income with gambling among other things.

Lou Cameron's Longarm books have a huge lot to say about Edward Zane Carroll Judson (aka Ned Buntline) tagging Hickok with a nickname he didn't use much if at all, and loves to call buntline an asshole. I suppose he'd just have snorted at this Judd Cole book ..

It's really hard to find Leisure Books around here so I'll have to turn to the Internet for this one. WILD BILL sounds like fun!

Yeah, it is John Ames. I actually don't have this one, although I have a couple of the later ones. Haven't seen John in a while. guess he's been keeping his nose to the grindstone. He always tells a good action packed story.

I've read all eight of these and found them to fun reads. Great entertainment as long as you can bypass the historical inaccuracies as you say James.

From what I can remember the reporter is with Hickok in all the books and Calamity might be too - she's in more than one anyway.

I read one of the later ones and enjoyed it.

Good to see you gave the Talmage Powell story top marks.
I recently read through most of Powell's Ed Rivers detective novels and was pleasantly shocked by how good they were. Solid little plots, but strikingly strong, vivid first person narration.
I wonder if his short stories were ever collected.

I'm pretty sure there's at least one collection of Powell's mystery stories, but I don't recall the title. I like the Ed Rivers books a lot, too.

Wow. Hey James, thanks for finding my comment and replying to it even though it's stuck to the wrong post. I must have been short on coffee.

I'll seek around for that Powell collection and let you know what I find.
It's a real shame that the Ed Rivers novels have never been reprinted. It seems to me that they are little gems of detective fiction.