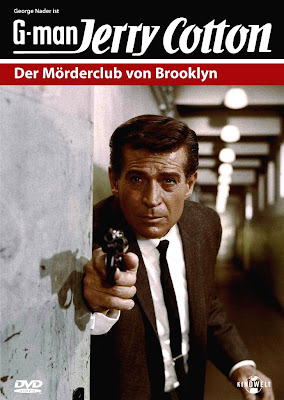 Here's the cover from the DVD of one of the Jerry Cotton movies starring American actor George Nader, THE MURDERERS CLUB OF BROOKLYN. There were several of these made in the Sixties, with titles like DEATH IN A RED JAGUAR and THE VIOLIN CASE MURDERS. They appear to have been filmed in the U.S., but with German casts and crews, other than Nader in the lead role. I've never seen any of them, but if I could find a DVD with English subtitles, I'd probably give it a chance. I can sort of read German, but understanding it when spoken is beyond my feeble linguistic abilities.
Posted by James Reasoner at 9:43 AM

James, it appears that these films are available on Amazon as DVD-Rs or to rent from Amazon's streaming program. Fairly cheap too. It says nothing about if they are sub-titled or dubbed but they are presented by Sinister Cinema which used to sell all kinds of wierd and obscure stuff on video.

I once tried to watch one, but couldn't. These are not necessarily very good films, James.

Yeah, I suspect they're probably not very good. I might try one anyway. Or I might not. I used to watch those Eddie Constantine films when I was a kid and liked them.

The Jerry Cotton movies were set in the US, but largely filmed in Germany (Hamburg mainly) with a bit of clever stock footage usage providing the American feel. They're surprisingly good, though the Edgar Wallace and Dr. Mabuse films from the same period are better.

George Nader, though little known in the US, was a big star in Germany at the time. When he died a few years ago, all major ran obituaries for him.

Thanks, Cora. IMDB lists U.S. filming locations for the movies, so I thought they were shot here.

All Jerry Cotton films include stock footage and a few have footage of a red Jaguar (Jerry Cotton's car) driving Manhattan, which may have been shot specially for the films. There are also a handful of clips of FBI agents doing martial arts training or lab work or sorting finger prints, which look like they were taken from a documentary. But that's the extent of the US footage, the actual films were shot in Germany.

German film producers of the 1960s were very skilled in using stock footage to make their films look more exotic than they actually were.