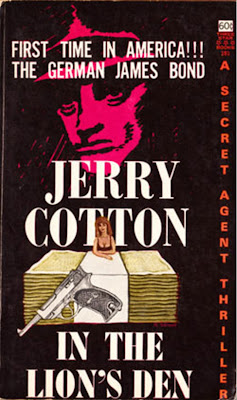 (The material in this post first appeared in different form on October 5, 2004)


A conversation on the WesternPulps list with Juri Nummelin strayed onto the topic of the Jerry Cotton books, a long-running series of mystery novels published in . Written by a stable of anonymous authors, the books were published under the house-name Jerry Cotton, and that's the name of the lead character as well. Cotton is a federal agent, a fairly standard wise-cracking tough guy. In 1965 one of the novels was published in an English translation by Three Star Books, a small paperback house, under the title IN THE LION'S DEN. I've had a copy of this book on my shelves for years, so today I read it. The cover refers to Jerry Cotton as the German James Bond (the cover is certainly designed to look like that era's Signet editions of Fleming's novels), but there's no James Bond feel to this book at all. Instead, it reads more like a very minor Gold Medal novel, with Cotton working undercover to clean up the corruption in a small Southern city. He gets shot at, beaten up, nearly run over by a gravel truck, almost blown up with dynamite, etc., and has one romantic interlude with a beautiful blonde who may or may not be working for the bad guys. It's all told in the usual breezy, hardboiled style, and while the writing is pretty mediocre most of the time, there are some nice scenes here and there. All in all, a slightly better book than I expected.

I always enjoy your comments on what you're reading. Mention of Jerry Cotton made me smile. That Three Star reprint, by the way, was the (as far as I know) only "mainstream" (i.e., not "spicy") title published by Merit Books, most famous for their Ennis Willie titles which have lately been much-discussed over at Ed's Place. I spent eighteen months in , courtesy of Uncle Sam, in the mid-60's, and German editions of Jerry Cotton were prominent in every bookstore and newstand. He was the German Nick Carter/Mack Bolan of his day. And yeah, I read that one translation like 40 yrs. ago and for some reason, I still remember the bad guys trying to run him over with the gravel truck. I wonder if Herr Cotton is still around...
(which led me to say)
Steve Mertz's comment prompted me to do a little digging into the publisher, Three Star Books of Chicago. A search on ABE turns up two more books they published: an anthology called GREAT SCIENCE FICTION, edited by Tony Licata and including stories by Ray Bradbury, Fredric Brown, Avram Davidson, L. Sprague de Camp, Arthur C. Clarke, Arthur Porges, Lester del Rey, and Brad Steiger; and IAN FLEMING'S INCREDIBLE CREATION, consisting of "Part I: My Friend Ian Fleming, by Paul Anthony (Fleming's drinking partner), and Part II: The World of James Bond, by Jacquelyn Friedman, an analysis of Fleming's work and of his character James Bond". Throw in the Jerry Cotton book, and that's a really odd trio. Three Star Books was a division of Camerarts Publishing Company, which also produced Merit Books, the publisher of most of Ennis Willie's novels.
Posted by James Reasoner at 6:00 AM

I read this book back in the 60s. I probably have a copy of it somewhere. I remember liking it, but even with your plot synopsis, i can't remember much about the story.

As you know, there was no shortage of spy novels back in the 60s and i read plenty of them. I have recently re-read some that i remember liking a lot back in the day, and sad to say, most don't hold up well. The upper tier like the Matt Helm series still work. My suspicion is, IN THE LION's DEN probably does not.

Jerry Cotton is still around, both as a weekly and a monthly paperback. It is far from the success it used to be, as the whole newsstand market is slowly dying. Used to be sold everywhere, but nowadays you often have to actively search for it.

and don't forget there were eight Jerry-Cotton-movies back in the Sixties with US-B-movie-actor George Nader in the lead. Those films were box office hits here in Germany and got a cult following. In 2010 was a Remake at the Movies but more in the comical vein.

It's still going pretty strong in Finland as well. You should know that this was published from the late sixties to the early nineties presented as translated from German, but actually written by Finnish writers, the likes of Tapani Bagge. It was an important training ground for many writers, and the Finnish Cottons differ greatly from the German counterparts, with more emphasis on humour.