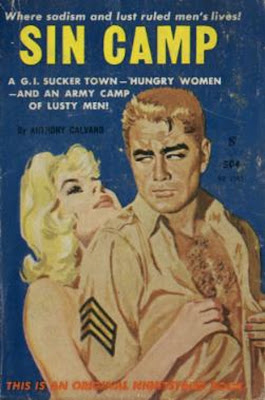 
Anyway, SIN CAMP is the first thing I've read by Calvano/Ramirez. It's an Army novel, set on and around the fictional Camp Coulter in Texas. The narrator, GI Tom Staton, falls in love with a young Mexican prostitute who works in a brothel in nearby Harden City. He discovers that she's being forced to stay there and decides to rescue her. Naturally, things do not work out well, as Staton also hooks up with a rich nymphomaniac (lots of those around in Fifties and Sixties erotica). There's another main storyline in SIN CAMP that involves the conflict between the enlisted men in Staton's company and the brutal non-coms in charge of them, and these sections read more like a mainstream novel.


There's a lot of raw vitality and fast-paced storytelling in this book to keep the reader turning the pages. The Calvano novels have a reputation for a certain amount of violence and sadism, and although it takes its time getting around to it, SIN CAMP has its share. There's also one plot development late in the book that comes out of left field. Despite its flaws, I enjoyed this one quite a bit and intend to continue sampling the various Nightstand Books that I have on my shelves.
Posted by James Reasoner at 6:00 AM

I was drafted into the army in 1966-1968 and these novels were the favorite reading matter in the barracks. The funny thing is almost the entire barracks housed enlisted soldiers with law degrees. You would think they would at least be reading The Tropic of Cancer, etc(:

I guess Fort Leonard Wood in Missouri would qualify as a "Sin Camp", since there was a brothel within walking distance of the camp's front gate. At the end of the month the girls would almost be giving it away free since the soldiers would be broke by that time.

Well, Walker, I can imagine that anyone in the barracks would find a barracks life novel less envy-inducing than TROPIC OF CANCER.

Wonder what else, aside from probably the PHOENIX FORCE, Ramirez published, if anything under his own name...looking now.

The Phoenix Force books weren't published under Ramirez's real name. I think the house-name on that series was Gar Wilson. But the "Special Thanks and Acknowledgment" bit on the copyright page credits Tom Ramirez. I recall reading a few of those books before I knew that Ramirez was also Tony Calvano, but at this late date I couldn't say whether I even liked them or not.

Looks like Ramirez published at least one short story as himself in NEW MYSTERY.

The Thomas Carr books are slightly written and updated (to make them more graphic) versions of Tony Calvano novels. These revisions were probably the work of some unnamed editor rather than the original author. Some of the John Dexter novels received the same treatment and were reissued under the name Jeremy Dunn. The same thing happened with some of the Andrew Shaw and Clyde Allison novels, although the later editions (known as Reed Nightstand editions) retained the original pseudonyms on those books. There's a long article by Lynn Munroe on his website about the Reed Nightstands, including a checklist of their titles and original titles.

I think Tom Ramirez may have had some stories under that name in MSMM and the U.N.C.L.E. digests, too. But I may be remembering wrong about that.

Speaking of Phoenix Force, didn't Bill Fieldhouse write some of them? I recall liking his entries in the series. Fieldhouse is a fine writer who I believe has retired, but I'd like to think he'll make a comeback one of these days.

Yes, my good friend Bill Fieldhouse was the main author of those old Phoenix Force titles, writing the majority of them, although mystery fans may be interested to note that PF #2 was penned (typed?) by none other than Dan J. Marlowe. As for Bill, he assures me that he has a new novel near completion. For my money, his best work thus far are the Major Lansing stories in the old MSMM.

Steve,
I'm very happy to hear that Bill Fieldhouse is still writing. If he'd put together a collection of all those Major Lansing stories and publish it as an e-book, I'll bet it would sell. I'd buy a copy to reread them, I know that.

Walker, I was at Leonard Wood in the winter of 66-'67 for AIT. When we finally got a chance to go to town I decided to stay on base. Too young to drink and didn't think there was much else to do in beautiful downtown Waynesville.

Cap'n, I had Advance Infantry Training(AIT), in the winter of 66-67 also, but mine was at Ft Dix. I was scheduled for Vietnam but they discovered I knew how to type and shipped me to Ft Leonard Wood. It seems back then that they needed typists more than riflemen because of all the paperwork and red tape.

Bet Bill C is lusting after this book.

James, are you sure this is the first Ramirez you've read? I seem to remember you wrote about one some two years back. Nevertheless, the book sounds fascinating!

Oh, I remembered right and wrong at the same time: you've reviewed the same novel here before! :)

Juri,
Yeah, the SIN CAMP post was a rerun, but my hope is that most of the blog's current readers didn't see it back then. I've been mixing in older posts that I think deserve a bigger audience. I planned to identify them as such, but I keep forgetting.

Yeah, that sure is a good strategy, I can't complain. :)