You can't get much simpler than the plot of UNSTOPPABLE.  Two average joe railroad workers try to stop an unmanned runaway train carrying toxic chemicals from crashing in a highly populated area.  That's about it.  There's a little back story for the characters, but not much.  Almost the entire movie is devoted to trying to stop the train.  And that makes for a very suspenseful film that I really enjoyed. 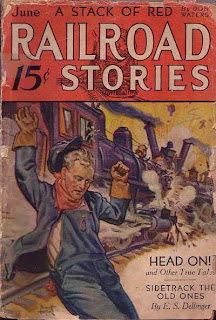 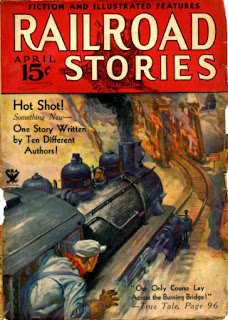 However, it occurred to me that very, very few of the people who watch this movie would ever realize it's a high-tech, 21st Century version of the sort of yarns that used to appear all the time in the pulp RAILROAD STORIES.  I have a few issues of this magazine, and it's pretty darned good.  Here are a few covers. 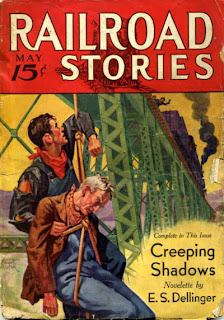 I wish someone - Tom Roberts, are you listening? - would collect stories from Railroad Stories.

There were authors who seem to have written primarily for RAILROAD STORIES, like E.S. Dellinger, but pulpsters such as Leslie Scott, Bennett Foster, and Carl Jacobi also wrote for the magazine. I'll bet a pretty good BEST FROM RAILROAD STORIES collection could be assembled. I doubt if it would sell very well, though.

I thought UNSTOPPABLE was pretty near perfect for what it was. Never let up, nicely filmed and acted, story made sense.

This was one of my favorite movies from last year. I really liked how there wasn't a "villain" per se, just a train that couldn't be stopped. Simple but clever, well acted, and lots of fun.

For a list of films set on trains, I guess you'd start with MURDER ON THE ORIENT EXPRESS.

Unstoppable was a thrilling movie. Kept my attention from start to finish.

I enjoy riding trains, though I don't do so very often.

I've only read a couple railroad pulp tales, but I really enjoy them. In a Secret Agent X story I wrote for an upcoming pulp anthology I have X's adventure take him on a train ride through hazardous terrain.

I had so much fun on the train that I'm going to have another pulpster try to stop a train robbery. Still waiting on approval for that plot. Finger's crossed.

I collect RAILROAD STORIES magazine and I'm glad to see you posting some of the covers. One of the very best of the writers who wrote for RAILROAD MAGAZINE AND RAILROAD STORIES was Harry Bedwell. He also wrote for the slicks but most of his pulp work appeared in RAILROAD during 1938-1956. He wrote one novel, THE BOOMER: A STORY OF THE RAILS(1942).

Also of interest for pulp collectors is a biography by Frank P. Donovan, Jr, titled, HARRY BEDWELL, LAST OF THE GREAT RAILROAD STORYTELLERS. The book lists Bedwell's pulp work and discusses the stories.

It is still possible to pick up issues of RAILROAD pulps for inexensive prices.