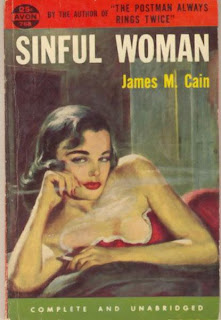 SINFUL WOMAN is regarded as one of James M. Cain’s lesser novels, but let’s face it, when you’re the author of THE POSTMAN ALWAYS RINGS TWICE and DOUBLE INDEMNITY, most of your other novels are going to be regarded as lesser. SINFUL WOMAN may not be anywhere near the level of those two novels, but it’s still a pretty entertaining yarn.


Set in Reno, Nevada, the story concerns beautiful actress Sylvia Shoreham, who’s there to get a divorce from her husband, a formerly penniless European baron turned movie producer. Sylvia meets the local sheriff, Parker Lucas, and they fall for each other immediately, but things are complicated by the arrival in town of the baron, his somewhat shady partner in the movie studio that has Sylvia under contract, and some colorful hangers-on. Throw in a casino owner, Sylvia’s troublesome sister, some insurance guys (Cain must have loved the insurance business, as often as it turns up in his books), and it shouldn’t come as a surprise that somebody winds up dead and Sheriff Lucas has a mess on his hands trying to untangle everything and save Sylvia from a murder charge . . . that is, unless she’s really guilty. 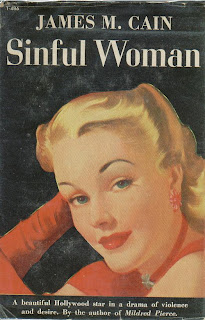 This is one of those books where a lot happens in a span of about twelve hours, and the plot gets pretty complicated. I think it all makes sense in the end, but I’m not sure. My only real complaint is that Cain goes overboard on the dialect in places. But I like the characters, especially the sheriff, and the book is pretty funny in places. The back cover copy on the edition I read refers to it as “a zany soap opera”, and that’s a good description. It’s definitely in the screwball vein.


If you’ve never read Cain’s work before, SINFUL WOMAN is not the book you should start with, since it’s not really that typical of his other books. But if you like the others, you’ll probably enjoy this one, too, despite its oddball nature. I thought it was fun.
Posted by James Reasoner at 6:00 AM

You're right, SINFUL WOMAN is not top-shelf James M. Cain. But it still has some great writing on practically every page. Cain's work bear study.

I enjoyed this one, too. Since most of Cain's famous books are in first person, the breezy third-person of this was a striking change. Also unusual because it was a paperback (digest) original.

"Breezy" is the perfect word to describe this book.

Ahh, love James M. Cain. Although, this is one I've never read.

I would add "quirky" to the description of this book. I thoroughly enjoyed it - as i have all of Cain's work - but my favorite Cain book not titled Double Indemnity, or Postman, is LOVE'S LOVELY COUNTERFEIT. Written in 1942, so an early Cain, it is a mob story whose main characters reminded me of the type folks that Peter Rabe would later write about.

Its been years since I read this book, so I'm a bit foggy on the plot details, but I recall enjoying in. If Jim Thompson ever wrote a screwball comedy, it would come out something like this.

I seem to recall that the difference in tone can be traced to the origin of the story: that Cain had originally written it as a screenplay for what he hoped would make a popular movie, in the current vein -- but that the studio rejected it. He re-wrote this screenplay into this novel.