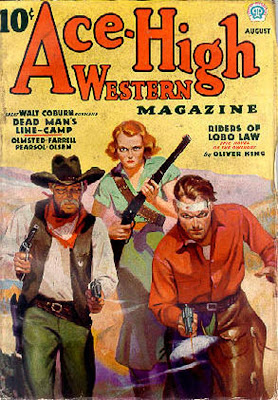 Of the three people on this cover, I think the girl is the scariest of the bunch.  This gun-toting redhead with the oddly intense eyes shows up on a number of Western pulp covers painted by Tom Lovell in the mid-Thirties.  She must've been a model he used.  I wouldn't want to get on her bad side, like whoever it is this trio is facing off against.


I wasn't familiar with Oliver King, who wrote the lead story in this issue, so I looked him up and discovered that he was really Thomas Ernest Mount, who was best known under the pseudonym Stone Cody.  I've read some of his work under that name and enjoyed it.  The other authors in the lineup -- Walt Coburn, Harry Olmsted, Cliff Farrell, James P. Olsen, among others -- are good ones as well.
Posted by James Reasoner at 8:18 AM

We've been wondering when the femme fatale begins appearing in western fiction. Is this her?

I'm also noting the apparent age of the man in the hat. He looks older than what you usually see on a pulp cover.

Popular evidently liked these three characters on their western pulps. For instance DIME WESTERN in the 1930's often showed covers with the old man, young man, and young lady, all riding hell for leather or blasting away with sixguns. Walter Baumhofer did many of the DIME WESTERN COVERS. I once owned an original painting showing these three by Baumhofer.

Those eyes could put a hole in a guy's heart from 40 paces away.

Yes, Steve and I have seen that glare. The typical glare of the non-collecting female as we buy another book!

Tom Lovell's wife, Gloyd, nicknamed "Pinky" for the pink paint smock she wore in art school, modeled for all the women on his pulp covers, whether it was detective, gangster, Western or adventure genre images. She probably modeled for any women in the Shadow interior drawings, too (although I can't recall any images off the top of my head with women in them in the Shadow.)

In expressing his undying gratitude for Pinky (she was deceased by the time of our conversations), Tom told me that she read the Shadow (and other) manuscripts for him, saving him time to allowing him more time for the production of art. She picked out all the scenes for him to illustrate and in doing so, Pinky picked up a thorough vocabulary of gangster slang.

With pride, but what seemed to me an underlying sense of remorse, Tom further shared that while Pinky was a very talented artist, she gave up her own opportunities and career to be the housewife, raise their kids and support his career. She assisting him in every phase: from making costumes, to finding reference, to reading MS, to running errands. He said he could not have succeeded without all her support and help which freed him up from every other responsibility around the house.

Any credit or praised lauded on him he always shared with her.

I found his humility and gratitude very touching.

Tom,
That's great info. Thank you very much! Do you know if Pinky Lovell ever modeled for other cover artists? I think I've seen her on covers that her husband didn't paint, but of course I could be wrong about that.

I would assume so, James, but am not certain. Pinky is all the strawberry blondes in Lovell's own work without doubt. But this is a character type portrayed on many of the covers too, as others have mentioned: old man, the young guy and the girl.

Tom Lovell shared a studio building in New Rochelle, NY with R.G. Harris and Richard Lyon. Graves Gladney was a few blocks up the street. And later Emery Clarke was there too.

All were young, ambitious, and starting their art careers by doing pulp covers. None were from New Rochelle, had no friends or family locally, so the guys and their wives formed their own little social club, took dinners together, etc..

Lovell moved into the studio space recently vacated by John Falter, who moving on to doing covers for the Saturday Evening Post, had left the pulp field. (Brothers George and Worth Brehm, book illustrators, had also occupied studio space in this building at one time.)

While I cannot recall specifically asking Lovell if his wife posed for others, R.G. Harris told me their wives posed for all the girls, whether they be of the empowered variety (as this Western girl appears) or the imperiled type (as on detective cover). And the wife of John Falter, too, posed for them at times. So I would assume at some point Pinky Lovell must have posed for one of the other guys too.

Being young and poor they shared props (saddles, hats, guns, boots) and each posed for one another (but rarely as the hero), helping the other guy in any way they could to get a job done. Gladney in interviews said this too, that they all shared and helped.

R.G. Harris was the first guy with a camera and taught the others in turn how to use it and develop film.

Some examples where the artists re recognizable as models include:

Gladney can be seen as the man in the hat in Emery Clarke's December 1938 Doc Savage cover, and a Thrilling Western cover for Lyon whose date I cannot recall at the moment.

Gladney was probably the model for the man in the foreground of Harris' Pete Rice cover for February 1936.

R.G. Harris can be seen as the villain in his own cover painting for Pete Rice November 1935.

There are other examples too, but I'd have to check notes. These I quickly recall off the top of my head.

Norman Saunders also used his wife quite often on his pulp covers. Walter Baumhofer liked to photograph models and even himself in various poses. He then used the photo to help him paint the cover.

I met Graves Gladney at the first Pulpcon in St Louis, 1972. He had a dozen of his Shadow cover paintings on display. Looking at Gladney and then the covers, it was easy to see that the Shadow was a self portrait.

Thanks, guys. I'm no artist, but I find this stuff fascinating anyway.

Speaking of Pete Rice (as Tom mentions), have you read any of those stories, James? I've never come across one. Wondered how they compared to other western fare of the time.

Duane,
I read one of the Pete Rice stories a long time ago and don't remember much about it other than the fact I wasn't impressed by it. I think some of the appeal of that title has to do with the great Baumhofer covers.