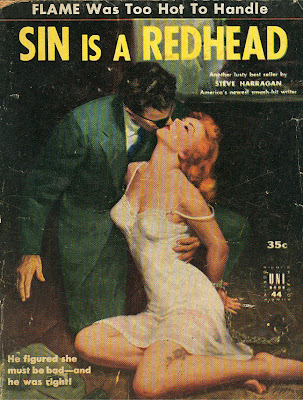 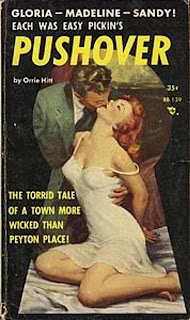 Observant readers of this blog with a good memory may recognize this cover art. That's because it was used, with some minor modifications, on the cover of Orrie Hitt's novel PUSHOVER, which I wrote about a while back. That comes as no surprise, since the publisher of SIN IS A REDHEAD, Universal Publishing and Distributing, later published sleaze novels under the Beacon Books and Softcover Library imprints, and smaller publishers like that often reused cover art. (UPD also published a wider variety of paperbacks in the Sixties and Seventies under the Award Books imprint, including scores of the Nick Carter, Killmaster novels before that series moved over to Ace/Charter and eventually Berkley.)


I've finally gotten around to reading SIN IS A REDHEAD. Great cover, great title, okay book. "Steve Harragan", the author, is also the main character. Harragan the character is a former crime reporter who hit it big playing the ponies and retired to become a man about town/hardboiled amateur detective. Some websites refer to him as a private eye, but he's not, at least not in this book. In SIN IS A REDHEAD, Harragan is driving down the street in New York City when he spots the beautiful Flame Tilson. He makes her acquaintance, finds out that she's the girlfriend of jazz trumpeter Siggy Houston, and regretfully decides that there won't be any romance with the gorgeous Flame.


But then she calls on him for help, Siggy winds up dead, Flame disappears, and Steve (who, to be honest, is not the brightest guy in the world) winds up on the spot for the murder. So off he goes, galloping around the New York underworld trying to find the real killer and rescue Flame from the bad guys. Along the way he winds up in a couple of pretty diabolical death traps, which he barely escapes. 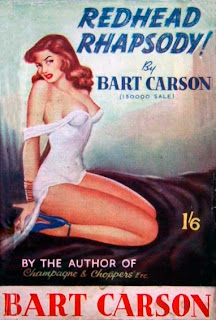 There's not much detective work in this book. It's more of a straight-ahead thriller, and while it's not particularly good overall, there are some nice scenes here and there and some surprisingly funny lines. It's written in that breezy Carter Brown style, and again, it's no big surprise to find that like Alan G. Yates, the author of the Carter Brown books, "Steve Harragan" the author is also an Englishman, William Maconachie. In fact, SIN IS A REDHEAD is actually a reprint of a British novel, REDHEAD RHAPSODY!, originally published by Hamilton & Company in London, probably in 1950, and reprinted in the States by Uni-Books in 1952. In the original version, both character and author were named "Bart Carson". The name was changed for the American edition, and the character was also given an eye-patch. All this information is courtesy of the top-notch British researcher and bibliographer Steve Holland, author of the indispensable history of post-war British paperbacks THE MUSHROOM JUNGLE. More details about Maconachie and the Bart Carson/Steve Harragan series can be found on Holland's excellent blog Bear Alley.


SIN IS A REDHEAD and the other Harragan paperbacks (which are actually digest size) seem to be pretty easy to come by, although some of them are a little pricey. I'm not going to run right out and order the others, but I found enough to like in this one that if I ever come across other books in the series I won't hesitate to pick them up if the price is reasonable.
Posted by James Reasoner at 6:00 AM

I've had four or five of the Harragan books for years, but I've never read one. Probably never will.

Those redheads! They're always up to no good. I heard it's because they have no souls. lol! Great detective work on tracing the book covers and the reprints of the book ;)

Sets the stage when they mentioned Peyton Place! :)

Again, what is it with redheads? Does their hair suggest wanton to men?

Seems like the cover may be the best part.

I have pondered the redhead question myself many times. All I know is, when I see one, I go, "Wow," or something to that effect. I think it's because they're so rare amongst a mass of blondes and brunettes that they get more attention.

As someone who has been married to a redhead for 32 years, I must say there's something to the redhead mystique.

Might weird history. Why does it say "150000 SALE" under the author's name on the British edition?

The observant reader may note that the woman's hands are tied behind her back on "Sin Is A Redhead" but are NOT tied in "Pushover" so there was definitely some fiddling with the art done ... it was not simply re-used. The cover of the original book might have the woman's arms tied behind her back, it's hard to tell, might be bracelets, but more notably, her forearms are huge.