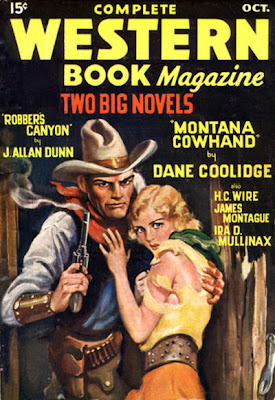 This is a pretty daring cover for a non-Spicy pulp.  I haven't read anything by any of the authors in this one except J. Allan Dunn, who is usually pretty entertaining.  Several of Dane Coolidge's novels have been reprinted in recent years and he had a pretty good reputation as a Western author, but I've never read anything by him.  I probably will, though, sooner or later.
Posted by James Reasoner at 8:18 AM

Sharp cover. I believe I have a Dane Coolidge story in a Zane Grey Western Magazine.

Dane Coolidge is one of my favorite western writers from the 1910-1930 period. Many of his novels were first serialized in POPULAR MAGAZINE, which was one of the better pulp magazines. His novels for the most part, were not the typical shoot-em-ups, but concentrated on the characterization and plot elements.

Ron Scheer reviewed a couple of his early novels on his blog, but for the most part Coolidge has been unjustly forgotten.

You've convinced me, Walker. Our local library has large print editions of several of Coolidge's novels. I'll give one of them a try as soon as I can find the time.

My favorite Coolidge novel was the first one I stumbled across - picking it at random from the library catalog: BATWING BOLES. Second would be MAN FROM WYOMING, which has a Butch Cassidy-type character in it. HIDDEN WATER is an early one and not as confidently told as the later two.

Project Gutenberg has five of his novels availalbe for free download or Amazon has them bundled for $1.99 if one prefers.

Dane Coolidge is pretty good from that period. Like Walker mentions, they aren't shoot-em-ups. THE MAN FROM WYOMING is pretty good. I first got interested in his work when I was buying old hardcovers that included illustrations by Maynard Dixon.