My memories of Hopalong Cassidy from when I’m a kid are of the TV show, of course, as well as the early films that starred William Boyd in the iconic black outfit and hat (Hoppy being one of the few good guys who wore black).


But years later, I discovered that in the series’ final years, there were a number of entries in which Boyd wore a tan suit and cream-colored hat, and the plots took on a definitely hardboiled, mystery-oriented tone. One of the best of these is THE DEAD DON’T DREAM, which is a great noir title that would have been just as much at home on a Gold Medal paperback. 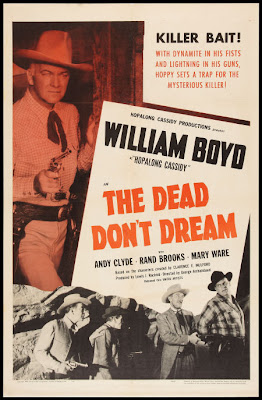 Boyd’s sidekicks in these later films are Andy Clyde as California Carlson and Rand Brooks as Lucky Jenkins. In this one, our heroes find themselves staying in an isolated frontier hotel where a murder takes place, and that killing is only the first of several. This film is actually structured more like a Charlie Chan movie than a Western (which I guess makes Andy Clyde the Mantan Moreland character) and is nicely photographed in sinister black-and-white.


THE DEAD DON'T DREAM and the other Cassidy movies from this era are nice, tight films that pack quite a bit of plot into running times that seldom went much over an hour. When the Hopalong Cassidy TV show was at its height in the early Fifties, some of the movies from the late Forties, like this one, were edited down to fit into a half-hour TV episode, which meant cutting them by almost two-thirds once you account for the commercials. I’ve seen those episodes, and they make almost no sense at all. But the original versions are well worth watching. I believe some of them are available on Netflix, including this one.
Posted by James Reasoner at 6:00 AM

Loved the TV show but have never seen a movie.

I happen to have this movie in a Hopalong box set, so I pulled it out and James is right about the Charlie Chan influence. This is more of a mystery film than the typical B-western. The hotel is called the Last Chance Inn and three guys bite the dust in the same room and bed. I think I've even seen this same murderous bed in the Charlie Chan series.

I might have seen this movie on TV over 50 years ago. As a kid we had a rental TV with a timer which allowed us to view one hour of shows for a quarter. This was in the early 1950's when TV's were expensive. Like all boys of that time, I was crazy about westerns.

My bedroom had a western motif, I dressed in a cowboy hat and sixguns; I read westerns and my favorite movies and TV shows were westerns. When I went anywhere, I galloped along making horse whinny's and sounds. My friends and I flipped and gambled western bubble gum cards and played cowboys and indians all day. I must have had hundreds of little western cowboys, cavalry, and indian soldiers. Even when I ate breakfast, the cereal box had cowboys on it.

I guess we overdosed on all things western and maybe got a little jaded. Now kids are hooked on texting and electronic gadgets. Somehow, I prefer the westerns...

My first hero was Hopalong watching reruns of the old movies on television in the early 1950s and cheering him when he appeared for many years in the Rose Bowl parade. My mom sewed me a cowboy outfit and I had two white handled cap pistols in a fancy holster set. Still have the holsters.

The movies hold up well in more recent viewing. Most I've seen lately are those with Andy Clyde. Understand Clyde was hurt when Boyd didn't include him on the TV shows.

I would like to see again the earlier films with Gabby Hayes.

That is a cool poster. For me Boyd was the class act of all the B cowboys. He had both authority and humor.

UNEXPECTED GUEST (1947) also has a mystery plot. After Boyd purchased the rights to his own character and started producing the movies himself, the budgets for his pictures were slashed, and that may be why his later films include a few "chamber westerns." UNEXPECTED GUEST also has a Monogram chan feel to it, including a reading of the will scene.

I like that great booming laugh of Boyd's. I just picked up a DVD with five of the films from the early 40s on it, but none with Gabby, who I think had already moved on to be Roy's sidekick by then.