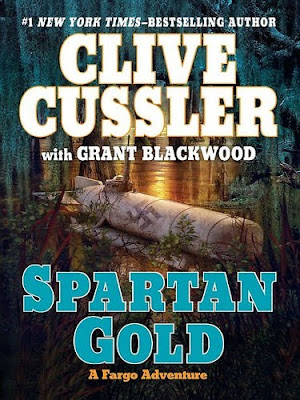 Every so often I get in the mood for a big, globe-trotting thriller with a lot of historical background. SPARTAN GOLD, the first book in a new series by Clive Cussler and Grant Blackwood, fits the bill quite nicely.

Almost like a Harry Stephen Keeler novel, this one starts out with a lot of seemingly unconnected elements – Napolean making a startling discovery in an ice cave in 1800; a German mini-sub sunk for sixty years in a Delaware river; a Ukrainian gangster originally from Turkmenistan who believes himself to be a direct descendant of the ancient Persian emperor Xerxes the Great – and weaves them all together into a coherent story. The protagonists responsible for untangling all of this and staying alive through an assortment of dangers are husband-and-wife scientists and treasure hunters Sam and Remi Fargo.

If you’re thinking this sounds a little like a Gabriel Hunt novel, you’re not far wrong in some respects, that is, if Gabriel were married. Sam and Remi are even independently wealthy and have the Fargo Foundation to finance their adventures. SPARTAN GOLD is much longer than a Gabriel Hunt novel, though, and lacks the breakneck pace. Which is not to say that it doesn’t have considerable appeal of its own.

Whoever did the bulk of the writing in this book (I suspect Blackwood, although I should stress that I have absolutely no knowledge of whether that’s correct) does a good job of making Sam and Remi very likeable characters who are easy to root for. Likewise, the frequent infodumps are easy to follow and not obtrusive. The plot is complex but winds up making perfect sense, at least as far as I could tell. My biggest complaint is that the ending doesn’t quite reach the dramatic heights I would have preferred. Anybody who’s read very many of my books knows my motto: If you’re going over the top anyway, you might as well go ’way over.

I get bored easily with long books, but I didn’t have any trouble staying with SPARTAN GOLD. It’s worth reading, and I won’t hesitate to pick up the next one in the series when it comes out.
Posted by James Reasoner at 1:14 PM

Have you read Andy McDermott?

Bob,
Nope, haven't read McDermott, but I just looked him up on Amazon and it sounds like I should check out his books. Anybody who comes up with titles like THE PYRAMID OF DOOM is my kind of author!

I liked Sam and Remi's chemistry...reminded me a lot of Hart to Hart (which I guess was supposed to evoke Nick and Nora Charles, but that's before my time). As for Andy McDermott, I liked his first book, but his second, while loaded with action, bogged down in the constant bickering between the lead characters. I guess that chemistry thing is kind of important. Yay marriage!

I've actually never read a Cussler, though I have a couple of them around here. I never was a market for the military thrillers but this sounds more down my alley.

I sort of had to give up on anything Cussler wrote when he had Canada Annexed to the US in one of the Dirk Pitt books, and then never mentioned it again. Things like that you would think would be worth mentioning.

its pretty sad though since most of his books are decent if not great. But, I believe that one was Nightprobe, was exceptionally wacky and I just had too little suspension of disbelief for anything else he did.

Cussler's work is pure crap. Only thing you can trust him on is to include a vintage car that his hero manages to get hold of (starting with Dirk Pitt and going on to multiple others he created after Dirk got way too long in the tooth)

If you want dumb pulp thrillers there's always Tom Clancy, once you get over laughing your ass off about his idea of how to run a government.

I like Clancy novels. At least the earlier door stoppers. It gets preachy when he wrote the last 2 or 3 Ryan novels.