Forgotten Music: That Thing You Do Soundtrack 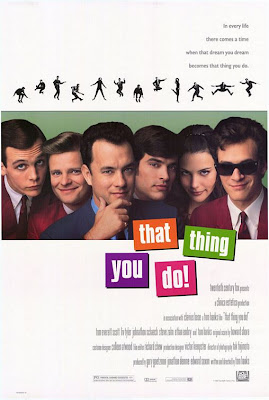 Making a movie set in a particular time period and using actual music from that era to help capture the feelings of the period is one thing, and I suppose like everything else about filmmaking, it can be a challenge to do it right. But it seems to me that coming up with new music that sounds just like it really is from another era would be even more difficult. That’s exactly what Tom Hanks and a number of collaborators did with the music for the movie THAT THING YOU DO, which was also written and directed by Hanks.

Set in the early 1960s, the songs from THAT THING YOU DO are a near-perfect blend of the musical styles from that era. The soundtrack begins with the Mitch Miller-like “Loving You Lots and Lots”, then follows up with the title song and several others performed by the fictional group from the movie, The Wonders. “Mr. Downtown” is a jazzy, noirish tune reminiscent of the theme from PETER GUNN, while “Hold My Hand, Hold My Heart” sounds like it could have been performed by any number of girl groups from that era. “Voyage Around the Moon” captures the same instrumental sound as “Telstar” and other hits inspired by the Space Age. “My World is Over” is a sad ballad, “Drive Faster” a hot rod song, and “Shrimp Shack” another instrumental from a fictional beach movie within the movie. (I can imagine Candy Johnson shimmying to “Shrimp Shack” without any problem.) The soundtrack wraps up with a long, smoky piano jazz song and a “live” reprise of the title song.

It’s hard to believe that it’s been almost fifteen years since THAT THING YOU DO came out. It’s a fine film, and the soundtrack does a beautiful job of capturing the era in which it’s set. And it’s just great fun to listen to, especially if you lived through those days and heard songs like these all the time.

It still annoys me that "That Thing You Do!" didn't win the Oscar for original song that year. If you don't buy the song, the movie fails - but you buy the song completely. It ended up losing to a tune added to EVITA solely to scoop up the award.

Along with Grace of my Heart and The Idol Maker, this is my favorite film about the music industry. Wonderful post.

You're right, hard to believe fifteen years have passed.

A spot on soundtrack.

I love the film largely for Steve Zahn. He had some great "throwaway lines." ("Table 4, your pizza is ready.", "Well, I like Wisconsin!"). And its his delivery which makes the lines so good. At less deft, less comedic hands, the lines would have fallen flat.

I'm a big Steve Zahn fan, and like everybody else in the cast, he's really good in THAT THING YOU DO.

I think some critics resented the "cloning" of Beatles music in this film.

I remember this movie. I actually enjoyed it quite a lot. And the music was pretty good.

I've not yet seen more than a few minutes of the film, but weren't they the "Oneders"?

I remember looking for this soundtrack right after I saw the film - and found it nowhere. Time to look again.

I agree with George. It's amazing how many tricks and sounds cues the group stole from the Beatles in the title song. It's almost a cover.

The group starts out as the Oneders, but they change the name to the more conventional spelling after they're introduced at a performance at the Oh-NEED-ers.

As much as I love the vibe of all the Wonders' songs, my favorite is "Mr. Downtown." Can't get enough of the brass and the saxophone! I haven't seen this movie in a long time. I'm going to hunt for it.

The theme song is a beaut, worthy of The Pleasers & The Rutles. Nice film,too.