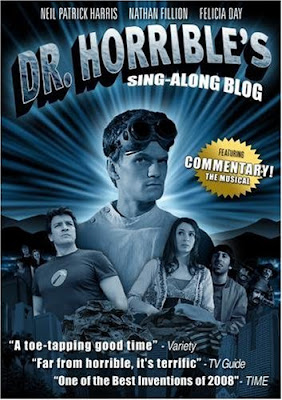 I had vaguely heard of this but wasn’t really sure what it was. My daughter had a DVD of it, though, so we gave it a try and I’m glad we did. DR. HORRIBLE’S SING-ALONG BLOG originally appeared as a series of webcasts and has some top-flight talent behind it, including writer/director Joss Whedon. It’s a musical spoof of superheroes and supervillains, with an excellent cast headed by Neil Patrick Harris, Nathan Fillion, and Simon Helberg. The songs are catchy, the dialogue is funny, and the ending is surprisingly poignant. This is another movie with a niche audience. You’ll probably either think it’s great, like I did, or you’ll be utterly bored. But it’s short (less than an hour), so you won’t have to spend much time finding out. Recommended.
Posted by James Reasoner at 6:22 AM

I've had this one on my netflix queue for a while. perhaps I need to move it higher on the list.

I followed this one as it played out on the web. Liked it and always hoped for more.

Never heard of it before. Have to check it out.

It also spawned a comic book. I read the first issue (don't know if there are anymore) and enjoyed it a lot. Dr. Horrible's attempts to become a famous super-villain are thwarted by his own incompetence and a douche-bag of a super-hero. You end up symoathizing with Horrible because he tries so hard.

I guess I'm alone on this one. I hated it.

And female lead Felicia Day has been making a career for herself with such other projects as THE GUILD (a web series with built-in geek appeal) and appearances in various other venues, including a charming astronomical educational video full of mild injokes (more built-in geek appeal).