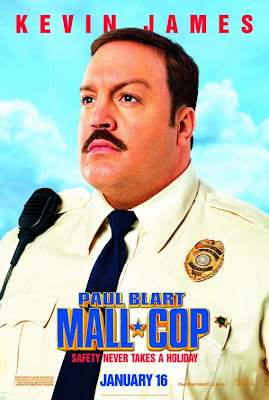 I always enjoyed Kevin James’s sitcom THE KING OF QUEENS, one of the many so-called “slob husband, hot wife” comedies that were popular for a while. He’s been good in a number of supporting roles in movies, too, but PAUL BLART, MALL COP is the first film where he takes the leading role. He also co-wrote the script with Nick Bakay, a good supporting comedy actor in his own right. Not surprisingly, James plays something of a loser, a guy who’s tried eight times to make it onto the New Jersey State Police but failed the physical exam each time. So he works as a security guard in a mall instead and lives with his mother and the daughter produced by a brief marriage to an illegal immigrant who married him for a green card and then took off as soon as the child was born.

This set-up occupies about the first fourth of the movie, and it’s funny but also sad. Then things change when a gang of robbers takes over the mall on Black Friday, the day after Thanksgiving, and Paul Blart winds up being the only one left in the mall to take on the thieves and rescue some hostages, including the kiosk girl he’s fallen for. From there on out it’s a pretty nice little spoof of the original DIE HARD.

This is one of those movies that got mediocre reviews, then made a lot of money, confounding the critics. I suspect that it was successful because it’s a well-written comedy that works more often than not. No, it doesn’t set lofty goals, and you’ll probably know just about everything that’s going to happen in it. But I sat and laughed and rooted for Paul Blart and had a fine time doing it. That’s plenty for me to say that this is a pretty good movie.
Posted by James Reasoner at 9:44 AM

I've been waiting for it on DVD too. There were not too many shows that made me laugh more than KING OF QUEENS. Especially the episode with pole-dancing.

I hated King of Queens and I would hate Mall Cop. But then I hated--HATED--Seinfeld.

I remember the pole-dancing episode quite well. Funny stuff.

I was never a Seinfeld fan, either. In fact, a lot of the critically-acclaimed, award-winning TV comedies of recent years didn't do much for me.

I thought the cast of THE KING OF QUEENS were better than their material, for the most part, but hadn't realized Nick Bakay, who has elevated most of the productions he's been involved with w/o too much public recognition, co-wrote it. (His devastating parody of David Caruso on NYPD BLUE when Bakay was the primary male ensemble member on the shortlived SHE TV was enough to lodge him in memory, leaving anything else aside. "You OK?") Thanks for the tip. (The sitcom cancellation that has been irking me of late is ABC's dumping of the fine SAMANTHA WHO?)

I remember Bakay-as-Caruso very well. Such a devastating parody that I was never able to take Caruso seriously again. To this day, whenever my wife and I see him in anything, we turn to each other and say, "You okay? You okay?"

“slob husband, hot wife” comedies that were popular for a while.You mean they're no longer popular?

According to Jim is the only one that's still on, and it's been cancelled. At one time there were at least three on the air: According to Jim, The King of Queens, and Still Standing. May have been more that I'm not remembering. Of course the tradition goes back to The Honeymooners and there have been others through the years, so I'm sure this particular sub-genre of sitcoms will make a comeback eventually.

James, you left out The Simpsons, which is where I tend to think the concept came from, and Family Guy. You're right, though, that The Honeymooners was first.