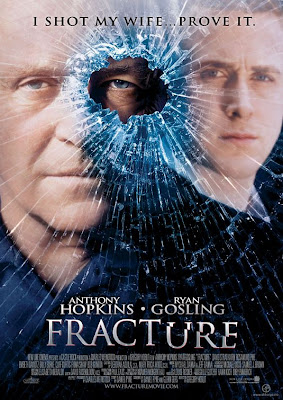 Last night we watched this legal thriller from a couple of years ago. Anthony Hopkins plays an aerospace engineer whose wife is cheating on him. He comes up with an elaborate plan to kill her, but although he shoots her at close range, she doesn’t die but is only in a coma. Hopkins’ character is put on trial for attempted murder, and Ryan Gosling is the young, ambitious deputy district attorney from a poor background who’s given the job of prosecuting him. The young DA is about to go into corporate law, and this will be his last criminal case. Not surprisingly at all, the defendant is a lot smarter than anybody gives him credit for at first, and through a series of legal maneuvers seems to be on the verge of being acquitted and getting away with his crime. The rest of the movie is a cat-and-mouse game between Hopkins and Gosling, with a missing murder weapon and a conviction or acquittal as the prizes.

As much as I love movies where stuff blows up real good, it’s nice sometimes to sit down and watch a movie like this where there are no special effects or explosions. A well-done battle of wits can be just as exciting. While there’s quite a bit about FRACTURE that’s by-the-numbers, especially the characterizations, it’s an entertaining film and worth watching if you have a couple of hours to spend.
Posted by James Reasoner at 6:12 AM

I thought the two were a good matchup in terms of their ability to create tension.

I agree with Patti. This was the first films with Ryan Gosling that I saw, and I can't imagine it's easy for ANY actor to go up against Anthony Hopkins, and Gosling really holds his own.

I figured out this morning that part of the plot in this movie doesn't really work. But it's still pretty watchable anyway.

Isn't Gosling in THE NOTEBOOK? I thought the first half of that movie held some promise, but it never paid off in the second half.

I couldn't stand The Notebook, even though a friend forced me to watch it the whole way through.

I saw this a couple years ago so I'm a bit fuzzy on details, but I found it really enjoyable despite the fact that there's a terribly big hole in the plot, and I'm wondering if you're talking about the same thing. (SPOILER WARNING) Hopkins' plot depends completely on a particular cop taking the call when he reports that he's shot his wife, and there's no way he can be certain that's going to happen. Is that what you caught?

I could almost buy that, but

even after the cops have the bullet and the murder weapon in the end, there's still no way they can prove in court what happened. As you say, though, it's still an enjoyable film despite the weaknesses in the plot.