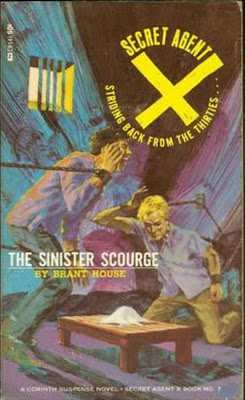 I’ve written about several of these Secret Agent X novels here on the blog, so obviously they’re not forgotten by me. There are also quite a few of them available in reprint editions, so pulp fandom knows about them, too. But I think it’s a good bet that the character has faded from the memory of the general public, and since this is a particularly good entry in the series, I thought it deserved a Forgotten Books post of its own.

Like a lot of other stories from the hero pulps, the Secret Agent X novels often feature some mysterious criminal mastermind who wears a mask or a hood or some such. There’s usually some bizarre murder method as well. Those elements appear in this novel, but for once, they’re actually minor. For the pulps, THE SINISTER SCOURGE, from the January 1935 issue of SECRET AGENT X, is pretty realistic. This time around, the Agent is engaged in a grim, gritty battle against a drug smuggling ring that’s flooding the country with a new super-drug. The main touch of typically over-the-top pulp business is the Agent’s uncanny ability to craft perfect disguises as a moment’s notice. Mostly it’s gun battles and fistfights as the Agent works his way higher and higher up the chain of command in the drug ring. At times this yarn reminded me a little of a Mack Bolan novel as Secret Agent X takes on organized crime.

The author behind the Brant House pseudonym this time around is Paul Chadwick, the creator of the Secret Agent X character. Chadwick is best known for his novels in this series, as well as a series of novelettes about investigator Wade Hammond that ran in the pulp TEN DETECTIVE ACES. His prose has a sweaty, breathless, almost overwrought quality to it that makes it easy to distinguish, and it works better than usual in THE SINISTER SCOURGE. There are also some welcome touches of wry humor amidst all the blood and thunder. While this novel isn’t really all that typical of the Secret Agent X series, it’s also one of the best I’ve read featuring the character.

A number of Secret Agent X novels were reprinted in the Sixties by Corinth/Regency, an offshoot of the publishing empire founded by William Hamling that also put out Nightstand Books, Midnight Readers, etc., the line of sort-core sleaze novels written pseudonymously by Lawrence Block, Donald E. Westlake, Robert Silverberg, Evan Hunter, Harry Whittington, and many other authors. I couldn’t find a cover scan from the original pulp to go with this post, so I used the cover from the Corinth paperback reprint instead. The art is by Robert Bonfils, who provided many, many covers for books published by Hamling.

James-When these novels were originally released, where did they sell them? Could you buy them at your average bookstore or did you need to order them? I am always in wonder that I never knew about all these books till I fell in with you guys. Clearly my library (where I got most of my books back then) didn't carry them.

They were in pulp magazines, so called because they were printed on cheap pulp paper with rough, untrimmed edges (also the source of this blog's name). They were available on every newsstand and probably in many cigar stores, candy stores, etc. You could also subscribe to them like you could to any other magazine. I can vaguely remember seeing some of the last Western pulps in grocery stores and variety stores in the late Fifties, mixed in with the regular magazines. They were regarded as cheap, disposable entertainment, which is why so many of them were read and then thrown away, making copies relatively rare today.

I've always gotten "Secret Agent X" confused with "Secret Agent X-9", the strip by Dashiell Hammett and Alex Raymond. Both appeared in 1934 and both were nameless, though X-9 eventually was "Phil Corrigan."

If I might, I think in this case Patti's asking where did you find these Corinth reprints...a lot of the books that are discussed have been pulp rerpints and "men's adventure" of the Worldwide Library sort, which were sold mostly in the same drugstores and airports as other paperbacks, but also were (like westerns) heavily in evidence in truck stops and other places where male readers were expected to congregate. Certainly most libraries weren't buying Worldwide titles (Worldwide, btw, is/was the brawny manful arm of Harlequin) any more than they were buying other Harlequin titles, nor were most public library collections getting too many of the pulp reprints (or, if you go back far enough, they weren't buying Gold Medal paperbacks of the '50s or earliest '60s).

At 44, I am just old enough to barely remember RANCH ROMANCES AND ADVENTURES on newsstands. All the other pulps were gone, though their digest heirs were still in evidence, as a few of them are still.

I'm not usually so dense. All I can do is plead overwork. Had to juggle a number of different projects this week. The Corinth/Regency paperbacks had the same sort of distribution around here that other paperback publishers did. I bought the ones I had in drugstores and grocery stores, since those were the only places in our little town that carried paperbacks. As it happens, I was in the same building tonight where I bought many of them, when it was a grocery store. It's a Mexican restaurant now.

While working on this story I was reminded of those "drug" issues of Spiderman the government convinced Marvel to do in the 70s, and wondered if this this story wasn't prompted by the government.