Holmes on the Range - Steve Hockensmith 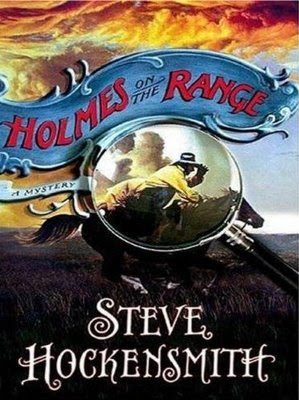 I’ve been meaning to check out this series for a couple of years, and I’m glad that I finally did. Many of you have probably already read HOLMES ON THE RANGE, but if you haven’t, I highly recommend that you hunt up a copy as soon as possible. It’s a dandy.

Gustav and Otto Amlingmeyer, better known as Old Red and Big Red respectively, are Montana cowboys in 1893, working on a ranch where there are some sinister goings-on. Old Red, who can’t read or write, is a huge fan of Sherlock Holmes anyway, having encountered magazine stories about the Great Detective that are read to him by his brother (who is also the narrator of this series). Having learned the art of “deducifying” from the Holmes stories, Old Red sets out to solve a couple of murders that take place on the ranch. His investigation is complicated by the arrival of a British nobleman who actually owns the ranch, along with the nobleman’s daughter and a couple of other investors.

Having a cowboy solving mysteries by applying Sherlock Holmes’ methods of investigation is a great idea, of course, but the real key to any great idea is its execution, and Steve Hockensmith does a really fine job here. Big Red’s voice is pitch-perfect, meaning that while HOLMES ON THE RANGE is an excellent mystery, it also functions as a top-notch Western, with Big Red’s narration ringing absolutely true. The mystery elements are well worked out, and the story is funny and touching and exciting, all of which leads me to say that HOLMES ON THE RANGE is easily one of the best books I’ve read this year. And I’m really glad that I have the next two books in the series on hand to read soon.

Now, if you’ve already read all three of Hockensmith’s books and would like to sample some other prime examples of humor, mystery, and Western action, allow me to recommend the novels of W.C. Tuttle, especially the ones that feature range detectives Hashknife Hartley and Sleepy Stevens. Hashknife and Sleepy appeared in novels and pulp novelettes from the Twenties through the Fifties. You’ll find the novels in the Westerns, not the mystery section, in your local used bookstore (or probably in the Nostalgia section if that store is a Half Price Books), but I think most of them would appeal to mystery readers as well.

Posted by James Reasoner at 9:55 AM

Thanks for the kind words about "Holmes on the Range"! Forget the Edgars -- if I can write a mystery/Western that passes the James Reasoner litmus test, I can rest assured I've really accomplished something. I hope you dig the follow-ups, too.

I think I read a W.C. Tuttle story a few years back: A reader sent me a photocopy of something Tuttle had published in one of the old cowboy magazines. It was a humorous tale, heavy on dialect and wacky misadventures (a circus elephant played a role in the plot, if memory serves). It was pretty amusing, but I haven't tracked down anything else by Tuttle since. But we've got an absolutely fantastic pulp-oriented bookstore here in the Bay Area -- Kayo, it's called -- and I'll have to hunt up some Tuttle the next time I'm there.

P.S.: Oh, and congrats to "Gabriel Hunt" on all the raves he's been winning for "Hunt at the Well of Eternity"!

These sound very interesting and just the sort of quirky westerns that would appeal to me. I'll definately be checking these ones out.

What a terrific idea for a western. I'm heading to Amazon next.

I've been meaning to try these myself. I just have so many to read, I've kept putting them off. Your review makes me want to get off the dime as I love Sherlock Holmes and so do these guys.

I whole heartedly agree, the series is fantastic. It is so good I actually created a big red fan site!