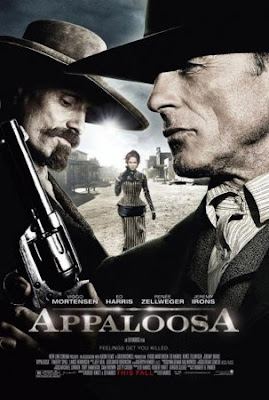 We finally got around to watching this movie based on the novel by Robert B. Parker. It was nice as always to see the old Western town where it was filmed. (They can call it Appaloosa, but it’ll always be Silverado to me.) The photography is great, with some of the shots so well-composed they look almost like Western paintings. The acting is pretty good, especially Viggo Mortensen as Deputy Everett Hitch, the sidekick to Ed Harris’s Marshal Virgil Cole. (Harris also directed and co-wrote the screenplay.)

I’m afraid that’s about all I can say that’s positive about APPALOOSA, though, as much as I love Westerns and wanted to like it. The pace is so glacially slow that it saps nearly all the life out of the movie. There are a couple of good action scenes, but they’re over quickly (nothing else in the movie is), and the rest of the time is spent with the characters sitting around talking. That may read fast in one of Parker’s novels, but it doesn’t play that way, at least in this movie. Clean up the language a little and you could probably boil this down to a pretty good half-hour TV episode, but as it is, I didn’t like it and don’t recommend it. And it pains me to say that.

Posted by James Reasoner at 9:51 AM

You're right that Viggo Mortensen is very good and makes everything he’s in 100% better. The slowness did have it creeping painfully slow but overall I liked it enough to recommend it for western aficionados. Non-western fans probably wouldn’t make it halfway through.

Know what you mean - the film was a let down for me too. OK but not as good as it could have been.

Got this in the Netflix queue. I'll add my two cents in a few days after it arrives and I've watched it. Agree with David, though...Viggo rules!

I have mixed feelings about 'Appaloosa'. I thought it was slow and not enough action for my age group. At the same time I got the feeling that I was watching something that told a story as it was in real life. At the time, I mean.

Maybe they were going for the arthouse crowd rather than the western fans. That can slow down the pace of any story.

I prefer to think of the pace as liesurely. I recently saw it for the second time and it seemed to move faster. Sorry you didn't like it. My 2 cents says see it.