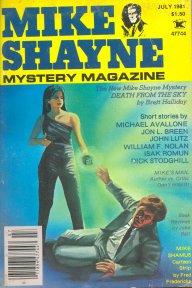 As I mentioned in one of the comments below, here's the list of Mike Shayne stories I wrote many years ago, interspersed with a few comments about the ones I remember. Some of them I have almost no memory of at all. All these stories were published in MIKE SHAYNE MYSTERY MAGAZINE under the pseudonym Brett Halliday. Most were 20,000 word novellas, although some were shorter than that and a few pushed 25,000 words. Not all the titles are mine, as the editors sometimes changed them.

“The Viper Conspiracy”, 8/80 -- the first Shayne of several I did with an espionage angle

“Mayhem in the Magic City”, 10/80 -- a story set in the 1940s, for a special "Crime in Other Times" theme issue; tells the story of how Shayne's wife died; more espionage, this time of the World War II variety; probably my favorite of the Shayne stories I did

“All the Faces of Fear”, 12/80 -- set against the background of a circus's winter quarters

“Black Lotus”, 1/81 -- the first story of three to feature a decidedly non-PC villainess, created at the request of editor Charles E. Fritch

“The Stalker of Biscayne Bay”, 5/81 -- one of my rare serial killer stories

“Byline for Murder”, 6/81 -- Tim Rourke is framed for the murder of a rival reporter

“Midnight Wind”, 8/81 -- another favorite; the old sinister doings at an isolated motel plot

“Killer’s Cruise”, 9/81 -- murder on a cruise ship, with Livia, myself, and several other authors making cameo appearances

“The Full Moon Means Murder!”, 10/81 -- another Hallowe'en story, this one with a werewolf

“Doomsday Island”, 2/82 -- the third and final Black Lotus story, with Shayne acting as a secret agent

“Havoc in High Places”, 3/82 -- another favorite; Shayne finds himself trapped with some dangerous characters in a Miami high-rise during a hurricane; havoc ensues

“The Assassination of Michael Shayne”, 6/82

“Book of the Dead”, 7/82 -- another one featuring cameos by real people

“Fishing for Murder”, 12/84 -- my final Shayne story, written as a favor to a friend who wanted to be a character in one of them

I should point out that Livia contributed to the plots and writing of many of these. At least one is mostly her work. It was a good run, but by the time I finished that two-and-a-half year stretch from May '80 to October '82, my brain was pretty much running on fumes. I'm tempted to go back and read some of these, since they'd be almost like new stories to me now. Maybe I'll get around to it one of these days.
Posted by James Reasoner at 11:34 PM

I remember some of these pretty well. I probably have most of the magazines somewhere.

I'll have to keep an eye out for these. That's really cool that you have this as part of your writing legacy.

Thanks a lot, now I'm going to have to try to find that issue with the spring training story to add to my collection which doesn't include mystery magazines. Thankfully I didn't subscribe to them in the years when my postman claimed I subscribed to more magazines than anyone. When he heard that his son had joined my slo-pitch team he said, "You are going to play for Kent Morgan who lives on Borebank. No one gets more magazines than him."

Thanks for listing these. I've only read a few Mike Shayne stories but I would definetely like to pick up a few that you wrote.

Would it be possible to get some of these reprinted or would it violate the Halliday copyright holders?

MSMM bought all rights to the Shayne stories, so I don't have any say in them anymore. And at this point I don't know who actually owns the rights to them, since Renown Publications hasn't existed for a long time. I assume the Davis Dresser estate just licensed the Shayne character to Renown and retained the rights to the stories themselves. Whoever has the copyright, it should still be valid.

That said, a few years ago a small press publisher approached me about reprinting some of the Shayne stories from the magazine (not just mine, but some by the other Halliday ghosts, too). I gave him some information and he was going to research the copyrights, but I never heard anything else so I assume he abandoned the project.

I'm thrilled to hear that you wrote some of the Mike Shayne stories. I picked up a bundle of the magazines several months ago. Unfortunately, they are packed away right now, for our move to Idaho at the end of July. It will be a while before I can get into those boxes.

I wonder who owns the rights to the Shayne character now.

I believe Davis Dresser's daughter is still alive and controls the rights to the character.