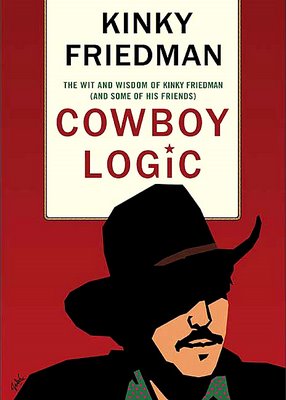 I'm going to break this blog's no-politics rule long enough to endorse Kinky Friedman. Not as a candidate for the governor of Texas -- although he may get my vote -- but as the author of this new collection of mostly humorous sayings culled from a variety of places, most notably the Kinkster's own wickedly warped brain. Included is one of my favorite quotes:

"This country was a better place when all the cowboys sang and their horses were smart."

Another one new to me that I like, from the section on writing:

"This is the twenty-fourth book that I've churned out -- I mean, carefully crafted."

As usual with Kinky's work, there are even a few serious moments, but I won't quote them here.

Scattered throughout the book are cartoons by the late Ace Reid, from his long-running comic strip "Cowpokes". Between the cartoons and the small amount of text on most of the pages, this is sort of like a Big Little Book for adults. You can probably read the whole thing in thirty minutes or so. But I guarantee, it'll be an enjoyable half-hour.
Posted by James Reasoner at 11:44 PM

Here's my official list of 10 reasons Kinky will get more votes in Texas than some people expect:

(1) Kinky has run for office in the past as a Republican,

(4) Kinky's public voting records confirm he was mistaken when he said he voted for Gore in 2000,

(6) Kinky wants to take time during the school day for prayers in schools,

(8) Kinky is not obsessed with political correctness,

(9) Kinky knows how to deal with illegal aliens from Mexico, and

(10) Kinky’s immigration policy of hiring Mexican generals to police our border is a great idea that John McCain has endorsed.

Links to all of this at my blog: http://kinkyisawesome.blogspot.com/