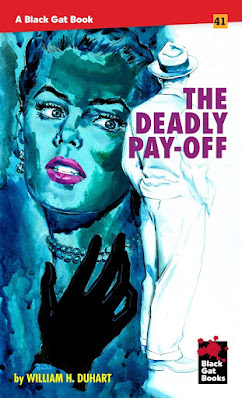 I had a copy of the original Gold Medal edition of THE DEADLY PAY-OFF by William H. Duhart on my shelves for more than 30 years and never got around to reading it. That copy was lost in the Fire of ’08, and I never replaced it. But Black Gat Books is about to reprint the novel next month and I was fortunate enough to get an ARC. I know when the universe is telling me to read something. And I’m very glad I did.

The protagonist of THE DEADLY PAY-OFF is professional gambler Tank Tabor, whose younger brother Bill is a private detective. Bill is poking around in a case and annoys Arky Calahan, the crime boss of Milwaukee, where this novel takes place. Calahan puts pressure on Tank to get his brother to back off, and when Bill refuses to do so, Tank finds himself framed for several crimes, including hooking an underage girl on drugs. Bill still refuses to drop the case and winds up dead. And Tank is framed for that killing, too, and has to go on the run to clear his name, solve several other murders, and keep himself and his friends alive. 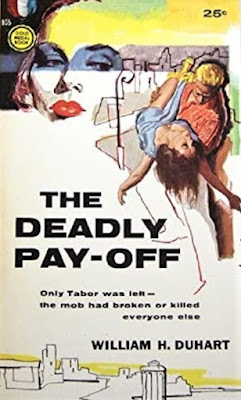 Boiled down, this is a pretty standard hardboiled crime novel plot, but Duhart puts a number of interesting and unexpected spins on it. He also keeps things moving at a good clip, provides some swift and effective dialogue, and really heaps problem after problem on his hero. I had no idea how Tabor was going to get out from under the sheer weight of everything stacked against him. THE DEADLY PAY-OFF is a good book, not the same level as those from Gold Medal stalwarts such as Harry Whittington, Day Keene, Charles Williams, and John D. MacDonald, but for a first novel it’s really solid and very much worth reading.

And the author is just about as interesting as the book, as we discover from the fine introduction to the Black Gat edition by Bill Kelly. William H. Duhart was a black ex-convict with literary ambitions who started this novel in prison and finished it while attending a prestigious writer’s colony in Illinois. You can’t tell that from the writing. Like Frank Yerby and John B. West, Duhart seems to have been a black author writing for a primarily white audience. However, probably the most sympathetic character in the book is Jock Adams, a black former numbers runner who’s had a falling out with the crime boss. He meets Tabor while both are in jail and teams up with him to bring Arky Calahan down. Jock is an excellent character, and I wish Duhart had given us some novels featuring him as the protagonist.

However, after his debut with THE DEADLY PAY-OFF, Duhart published only 11 short stories in the lower-rung crime fiction digests of the late Fifties and early Sixties, and then the novel RAVISHING SEDUCTRESS, which came out from Merit Books in 1962. That seems to be the end of his writing career, although he didn’t pass away until 2003. There are some great titles among the short stories: “Fear Stacks the Deck!”, “Lust of the Damned!”, “Never Con a Killer!”, “Passion Swamp!”, and more. I realize it would really be a niche market item, but a reprint of RAVISHING SEDUCTRESS, along with those short stories, would be a great thing to have. I know I’d want a copy. Maybe one of these days.

In the meantime, the Black Cat edition of THE DEADLY PAY-OFF will be out in a couple of weeks, and you can pre-order it on Amazon. I had a fine time reading it, and if you’re a hardboiled crime fiction fan, you should check it out.
Posted by James Reasoner at 6:30 AM

Excellent! And thanks for nudging our friend at Stark House...let's hope this one does well and makes that viable option to explore. I have to wonder, not having looked yet, if those are short stories in W. W. Scott's magazines, which were more middle-range, but notable (as Robert Silverberg and Harlan Ellison, young up and comers at the time, have certainly noted) for Scott's ability to come up with some of the most OTT lurid/snappy titles, even when Ellison, at least, would figure he'd already gotten there first on some of his submissions, only to see his attempts trumped.