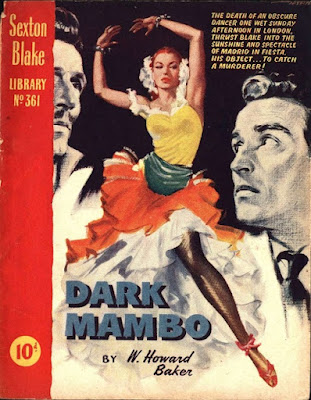 The only Sexton Blake stories I’ve read have been from the early 20th Century when he’s a Sherlock Holmes-like “consulting detective”. But later in the character’s career, he’s more of a regular private eye type. I recently read my first Blake novel from that era, DARK MAMBO by W. Howard Baker, published in July 1956 as Sexton Blake Library, Series 4, Number 361 . I read it on the Comic Book Plus website, which has more than 250 Sexton Blake novels and stories scanned, ranging from 1919 to 1958.

This one opens on a rainy Sunday afternoon in London. Blake is in his office alone, wrapping up a report on a case, when the telephone rings. It's a potential client wanting Blake to come see him at once. He doesn’t explain what it’s about, but Blake is intrigued by the man’s seeming sense of desperation and agrees to pay him a visit.

When he gets there, he finds that the caller is a wealthy man whose mistress, a beautiful blond nightclub singer, is lying on a rug in his study with her throat cut. She’s been blackmailing him, so he knows he’ll be the prime suspect in her murder. He hires Blake to find the real killer. Before long, another woman is killed the same way.

Aided in his investigation by his beautiful blond secretary Paula Dane (there are several beautiful blondes in this book) and following a trail that leads to Madrid, Blake uncovers connections between the victims and a couple of shady nightclub owners, a handsome young bullfighter, and the beautiful widow of a high-ranking Nazi officer. Unraveling the whole thing puts both Blake and Paula in danger.

As I was reading this, something about it struck me as familiar. I knew that I hadn’t read it before, but eventually I realized that it reminded me of the sort of Mike Shayne story that showed up a lot in MIKE SHAYNE MYSTERY MAGAZINE. Move the opening scene from London to Miami and it would work just fine. There’s even an antagonistic cop and a friendly cop, like Peter Painter and Will Gentry in the Shayne stories. Blake gets knocked out and taken for a ride by the bad guys, and that’s certainly a scene I’ve read (and written) before. Paula Dane even serves as a Lucy Hamilton sort of character.

I’m not saying there’s any connection between Blake and Shayne. Not at all. It’s more a matter of just remarking on the similarities that crop up in the genre. And for all I know, W. Howard Baker may well have read some of the original Mike Shayne novels. Baker was a prolific British paperbacker who’s probably best known in the United States for writing some of the tie-in novels based on the Patrick McGoohan TV series SECRET AGENT. Macfadden-Bartell published several of them in paperback in the U.S. His prose in DARK MAMBO is functional, pretty meat-and-potatoes most of the time, but you can tell that he’s at least attempting to be more poetic in a noirish way now and then. He does a decent job of it, too.

I enjoyed DARK MAMBO quite a bit. I plan to read more of those Sexton Blake, Private Eye yarns. Short, fast-moving, and fun really fits the bill of what I’m looking for most of the time these days.

An enticing review, James. I don't think I've re-read this one since its first appearance, but will go through my boxes to sort out a copy. Sexton Blake, along with other fictional detectives like the Saint, the Toff, Mike Shayne etc., played an influential part in my boyhood and youth. I began reading the Sexton Blake Library in the early 1950s. And in 1961, on leaving school at age 18, I was fortunate enough to be offered the position as Bill (W. Howard) Baker's editorial assistant for the SBL at Fleetway, a role being vacated by then emerging fantasy giant Michael Moorcock. Working for Baker was an illuminating introduction to the intricacies and secrets of the genre fiction business! I see you are a member of the Facebook Sexton Blake Society where I also occasionally leave the odd comment and post.

In 1956 I would have been 13 years old, James. It was then, of course, only just possible to be accepted at 18 for a responsible position in a major publishing firm. Even those at the company management level were apparently unaware of how much opportunity and leeway a junior could be given by his seniors (or how happy a senior might be to offload the chores on to young shoulders). I think I had been offered my big chance on the strength of well-received articles and reviews in a fanzine and letters to editor Bill Baker, who had previously invited me as an awestruck schoolboy to the Farringdon Street offices to meet him. The dream first job did turn out to have its downside. Pay was on a trade-union negotiated pay scale which would have had me receiving less than a senior's wages for five years. But Fleetway was also failing to take an obvious step to update the Sexton Blake Library from its unattractive small-print, 64-page digest-style format into conventional paperback. When the company announced cancellation of the long-running series in late 1962 I was more than ready to move on to a competing and much smaller backstreet publisher. At Micron Publications I wrote scripts, was made responsible for editing a chain of comic books -- mainly western and war -- and was appropriately paid for procuring the material (scripts and artwork) for twelve titles per month. Astonishingly now, I was also able to find time to propose, design, and launch the EDGAR WALLACE MYSTERY MAGAZINE, which provided a new market for some favorite Sexton Blake and other crime writers. It seemed the day of the "boy editor" had arrived!