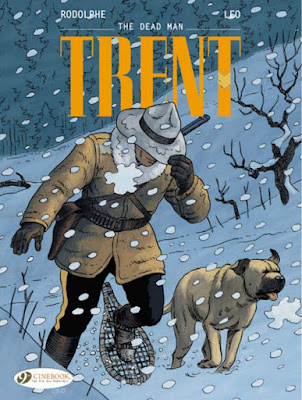 If you’ve been reading this blog for very long, you know I enjoy Mountie stories. A friend of mine on Facebook recently mentioned a series of graphic novels about a Mountie sergeant named Trent, so I had to check them out. Written by French author Rodolphe Jacquette, with art by Brazilian artist Leo (Luiz Eduardo de Oliviera), they’ve been translated into English and are available on Amazon and as part of Kindle Unlimited.

The first volume, THE DEAD MAN, finds Sergeant Trent and his canine companion, known only as Dog, on the trail of a wanted murderer. In the snowy wasteland, they come across a lone traveler who turns out to be a beautiful young woman on a mission of her own. Trent saves her from a blizzard and reluctantly agrees to help her on her quest before returning to his own assignment.

The big plot twist in this one is pretty obvious, and there’s a lot of brooding and not much action, but danged if I didn’t get caught up in the story and enjoy it a lot anyway. The art is great, Sergeant Trent is a good protagonist, and I think there’s a lot of potential in this series. Originally published during the Nineties, there are eight volumes in all, and I definitely plan to read the others. This isn’t the sort of two-fisted, action-packed Mountie yarn that I love so much in the pulps, but I give THE DEAD MAN a high recommendation anyway.