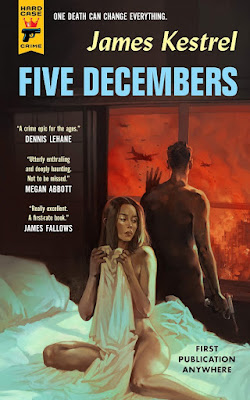 FIVE DECEMBERS is an epic, ambitious novel that combines several genres and does so with impressive skill. First and foremost, it’s a hardboiled mystery yarn, and one of the best that I’ve read in years. Protagonist Tom McGrady is a Honolulu police detective who catches a gruesome double murder case in late November, 1941. A young man and woman have been killed, and one of them has a connection to a high-ranking naval officer, so the pressure is on McGrady to solve the case and catch the murderer. That investigation takes him west from Hawaii, to Wake Island and on to Hong Kong, on the trail of a clever, absolutely ruthless killer.

But yeah, I’m sure you noticed the date up there. December 7, 1941 is not a good time to be in the Far East chasing a murderer. And at that point in the story, FIVE DECEMBERS becomes a war novel, depicting with intensity and power the early days of World War II as Tom McGrady is swept up in the chaos. As time passes, however, FIVE DECEMBERS evolves into a love story, as well, and it’s a poignant and effective one.

There’s still a murder to be solved, however, and a killer to be caught, and Tom McGrady never loses sight of that as he’s determined to finish the job, whatever it may cost him. So for its final third, this novel turns back into a hardboiled thriller, with great action scenes, plot twist after plot twist, and a very satisfactory climax.

James Kestrel is a pseudonym for an author who has written several other critically acclaimed mystery novels. In FIVE DECEMBERS, he’s produced a potential classic. It’s the best book I’ve read this year and one of the best I’ve read in a long time. Great writing, characters, and plot. I give it my highest recommendation.

This one, like all HARD CASE books, was already on my radar. I'm definitely reading it after that review.