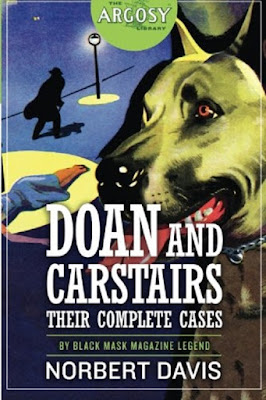 I’ve been meaning to read Norbert Davis’s Doan and Carstairs series for, oh, fifty years now. One of the libraries I frequented as a teenager had a copy of the novel SALLY’S IN THE ALLEY, which I thought was an intriguing title. I never got around to checking it out and reading it, though. Then as the years passed, I read all sorts of good things about the series, but again, never got around to it. Until now.

For those of you who don’t know, Norbert Davis was a top-notch author of pulp stories, mostly in the detective genre. He wrote extensively for such iconic pulps as BLACK MASK, DIME DETECTIVE, and ARGOSY and also cracked the slicks, like THE SATURDAY EVENING POST. His mystery yarns included series about private eye Max Latin and bail bondsman Bail Bond Dodd. 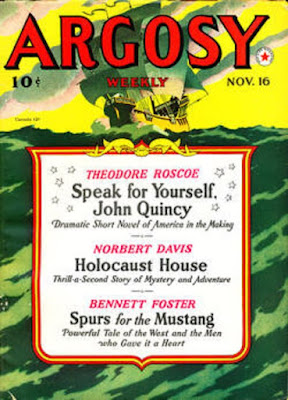 In the Doan and Carstairs series, Doan is also a private eye, a pudgy, deceptively mild-looking little man who works for the Severn Detective Agency. Carstairs is a Great Dane, a huge, fawn-colored beast Doan won in a poker game. I just read the first story in the series, a short novel called HOLOCAUST HOUSE that was serialized in ARGOSY in 1940. Carstairs doesn’t appear much in this one, but I have a feeling he’s more of a sidekick in future books.

Instead, Doan is given the job of going to an isolated mountain lodge to protect a young heiress who believes she’s in danger. When he gets there, there’s a snowstorm going on, so the lodge is even more isolated than usual. Several other characters are on hand, all of them suspicious, of course, and it’s not long before a murder occurs and it’s up to Doan to untangle a very complicated plot and not get himself killed in the process . . . which he does with great efficiency and more than a little violence.

HOLOCAUST HOUSE is a wonderfully entertaining story with a fast-paced, tricky plot and lots of great dialogue. Davis’s prose is just as smooth as can be, often very funny and plenty tough when it needs to be. You can buy the whole series in a great collection from Altus Press. Really, you can grab just about anything by Norbert Davis and not go wrong. I’m glad I didn’t start this series until now, because I’m very much looking forward to reading the rest of it.

His western stories are amazing.

I've been a fan of these since discovering SALLY'S IN THE ALLEY years ago. I bought an ebook of the four titles - called THE DOAN & CARSTAIRS MYSTERIES (Halcyon Classics Series) a year or two ago, for a lot less than $29.95. It's great stuff at any price.

One of the big mysteries involves the question of why did Norbert Davis commit suicide at the age of 40 in 1940? An outstanding career cut short by this tragic death.

Davis is one of the few pulpsters whose prose gets so good, so well wrought, that it can stop me in the middle of the page to admire and re-read a sentence or paragraph.
This often happens when he's being funny, which can come as sharp observational humor or straight-up goofiness, but most often when the story shifts into danger and violence.

There's a Bail Bond Dodd story where Dodd is jumped and viciously beaten. His injuries trouble him more than these kind of things generally effect series characters featured in Dime Detective. Dodd's a pretty easy-going guy, keeping his head when annoyed or troubled by any number of Davis's eccentric characters, but when he finally catches up with the guys that beat him he goes ice-cold and exacts a startlingly brutal vengeance.

I'll read anything by Davis. I think he's one of the most under-rated authors to come out of the pulps.

Comparatively few writers of what is generally categorized as pulp fiction were, or are, properly recognized and rewarded during their lifetimes. Happily for us as readers, Norbert Davis's work, like that of many other worthy writers, has been available online in more recent years, price-free and upwards.

My favorite story about Davis was recounted in the December 2010 edition of the Black Horse Extra ezine:

"Norbert Davis, of the magazines Black Mask, Detective Fiction Weekly and Dime Detective, who sadly took his own life at the age of 40, had one of his pulp western stories, A Gunsmoke Case for Major Cain (from Dime Western, October 1940), filmed as Hands Across the Rockies starring B western actor Wild Bill Elliot. Fellow fictioneer E. Hoffman Price recorded in a biographical sketch of Davis the following incident that fits right in with the precarious way of life led by the under-rated and under-appreciated creator of escapist fiction.

"Davis as an undergraduate took a few writing classes during which an instructor roundly condemned one of his early pieces of fiction. Davis stood up in class — 'an imposing figure, if absurdly thin, at six feet five inches' — and pulled a cheque from his pocket. 'Sir, this is a cheque for $200 from Argosy. The editor didn’t find much fault with my story.' The instructor wasn’t impressed, pointing out that they weren’t in class to learn how to make money writing but to learn how to appreciate literary merit."

I like the Carstairs series very much but prefer his some of his other work. One correction, I don't think Norbert Davis committed suicide in 1940. Raymond Chandler sent him $200 in 1949 (see his letter to Carl Brandt for April 18, 1949). But despair over his faltering career did lead to Davis'suicide later in 1949. Earlier in the decade, Davis only lived two doors away from the Chandlers.

Under the pseudonym of Harrison Hunt (with W.T. Ballard) he wrote: "Murder Picks the Jury", Curl 1947

Right Richard. Davis committed suicide in 1949. I guess I was thinking of Fred MacIsaac who killed himself in 1940.