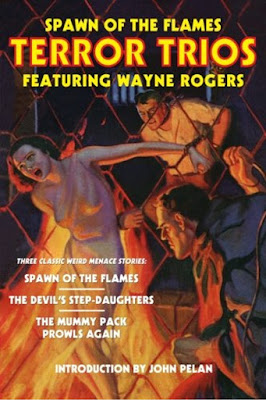 Several years ago, Altus Press published a series called TERROR TRIOS, each volume of which reprinted three Weird Menace novellas by leading authors in that genre. SPAWN OF THE FLAMES focuses on Wayne Rogers, who was notable for writing some of the most violent Weird Menace stories in the pulps.

Rogers’ real name was Archibald Bittner. For many years he was primarily an editor, helming such iconic pulps as ARGOSY and SHORT STORIES. However, he also dabbled in writing using the Wayne Rogers name and eventually concentrated on that end of the business. During the Weird Menace boom, he was one of the most prolific and highly regarded pulpsters turning out those stories, as well as occasionally filling in on pulp hero series such as Operator #5 and The Spider.

“Spawn of the Flames”, the title story in this volume, was published originally in the June 1936 issue of TERROR TALES. The protagonist is a young man who was born in a crematorium and fears that he has grown up to have a split personality, one of whom is a vicious pyromaniac and torture killer. He comes home because his father is ill and on the verge of death, bringing his fiancee, his best friend, and his best friend’s girlfriend with him. His lawyer and stepmother are on hand, too. Some of them won’t survive, as “Spawn of the Flames” becomes as violent and sadistic as any slasher movie or splatterpunk novel. I’m not a fan of such graphic stuff in movies, but it doesn’t bother me as much in prose. Rogers’ style is incredibly fast-moving, which also helps. This is one of those stories where the plot only makes sense if you squint your eyes and hold your mouth just right, but I enjoyed it anyway.

“The Devil’s Step-Daughters” (TERROR TALES, February 1936) is set in the idyllic-seeming town of Malstead in New Hampshire, where the narrator, lawyer Ted Walton, is engaged to the oldest of three beautiful sisters who are believed to be descendants of a witch who lured young men to their deaths back in the Seventeenth Century. When a wave of grisly murders strikes Malstead and sinister black-robed figures begin prowling the streets, the placid façade of the town is shattered forever. As a mystery (which most Weird Menace tales, at their heart, really are), this one is pretty easy to figure out, and Ted Walton is an even more ineffective protagonist than you usually find in yarns like this. However, it does have Rogers’ breakneck pace and brutal action scenes going for it, so while it’s not as enjoyable as “Spawn of the Flames”, it’s still pretty entertaining.

This volume wraps up with “The Mummy Pack Prowls Again”, from the April 1937 issue of DIME MYSTERY MAGAZINE. This novella also takes place in a small New England town, Waterville, which is plagued by the sudden outbreak of a mysterious malady that turns its victims into living mummies by withering their flesh until they’re just skin and bones. This affliction also drives them mad and makes them seek human flesh. In other words . . . they’re zombies, in the sense that the word is often used now. The narrator, Warren Craig, is the city manager (protagonists in Weird Menace usually have mundane occupations like that, instead of being cops, private eyes, etc., probably to make them more identifiable for the readers). Compounding the horror is the fact that his beautiful fiancee falls victim to the sinister illness. This one isn’t quite as gruesome as the other two yarns, possibly because it was published in DIME MYSTERY, the flagship of Popular Publications’ Weird Menace line, rather than the generally more graphic TERROR TALES.

Having read these three stories, my first impression is that Wayne Rogers’ work in this genre is a little too violent for my taste, or maybe I just read them too close together. (I did space them out with other stuff in between but still read all three in the span of a week and a half.) That said, I’d read more by him because his action scenes are very good and he knows how to maintain the sort of breakneck pace that I like. I can see why he was a popular writer. For now, if you’re already a fan of Weird Menace stories I can certainly recommend SPAWN OF THE FLAMES. If you’ve never sampled the genre before, this might not be the best place to start.

I have always enjoyed Wayne Rogers. Either in Weird Menace or as alternative Spider writer. However best author to introduce one to Weird Menace has to be Hugh Cave, think a bunch of formerly very expensive stuff is now available via Kindle.

I think Hugh Cave and Arthur Leo Zagat are the best of the Weird Menace writers. Cave was just top-notch whatever genre he was writing.

I thought that the title story was pretty lousy (the ending was especially lame), so I don't think I'll bother reading the other two. The only authorsof Weird Menace stories that I find entertaining are Donald Dale (possibly the only woman who wrote in that not unjustly maligned genre)and Russel Gray.

I don't recall reading anything by "Donald Dale" and didn't know she was a woman. I'll have to see if I can find some of her stories. Russell Gray was really Bruno Fischer, who had a long, successful career as a mystery novelist. I've read a few of his Weird Menace stories and liked them. It's been years since I read it, but I believe his best-selling Gold Medal novel HOUSE OF FLESH had some Weird Menace influence in it. I need to read more of his work.

Donald Dale was a pen name used by Mary Dale Buckner. With the cover art used be the weird menace magazines it's understandable that she didn't want to advertise the fact that she wrote for them. Reminds me of the (probably untrue)story that HPL used to tear off the Brundage covers on his copies of Weird Tales before he read on the bus.