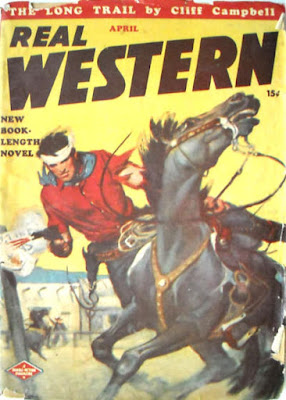 This looks like another pretty good Western pulp from bargain basement Columbia Publications, beginning with a nice dynamic cover by, I think, H.W. Scott. But I could be wrong about who the artist was. Inside, the lead novel is by Cliff Campbell, who could have been just about anybody since that's a house-name. Other authors on hand in this issue of REAL WESTERN are Lee Floren, Chuck Martin (twice, once under his own name and once as by Clay Starr), Allan K. Echols, and Harry Van Demark.
Posted by James Reasoner at 4:00 AM

Professional History
Cliff Campbell was not only a Golden Age comic book writer, but he also wrote short-stories for pulp magazines. During the early 40s, he was the co-editor of several short-lived magazines, such as, Smashing Novels Magazine, Undercover Detective and Black Hood Detective (aka: Hooded Detective). At MLJ Comics, he scripted several stories featuring his creations: the Black Hood and the Hangman.

Cliff Campbell's pulp career lasted from 1936 to 1956 and totals a couple of hundred stories, at least, as well as editorial credits. It's been considered a house name as far back as I can remember, but you can't rule out anything in the publishing business. I wonder if there might have been a comic book writer actually named Cliff Campbell, and the author of the Wiki article is unknowingly combining him and the pulp Cliff Campbell. Probably never know for sure at this late date.

Abner Sundell appears to have been the original Cliff Campbell, but after he stopped writing it became a house name and was used by Harry Shorten, among others. Interesting stuff. Thanks for bringing it up.