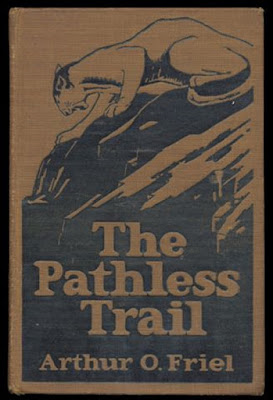 I've known of Arthur O. Friel's reputation as a top writer of adventure fiction for quite a while but have never read his work until now. THE PATHLESS TRAIL, originally serialized in the iconic pulp ADVENTURE from October 10 to November 10, 1921, is perhaps his best-known novel and introduces a formidable trio of adventurers: Roderick McKay, Meredith Knowlton, and Tim Ryan. The three of them all served together in the Great War, McKay and Knowlton as officers and Ryan as a sergeant.

As this novel opens, the three friends have journeyed up the Amazon River to the border country between Brazil and Peru. They're in search of an American who vanished in the area several years earlier. Everyone figured he was dead, but then reports surfaced of a strange wild man who matches the missing man's description living in the jungle among tribes of cannibals. The disposition of a valuable estate hinges on determining whether he's alive or dread, and McKay, Knowlton, and Ryan have taken on the job of determining that and bringing him back if by some miracle he's still alive.

Of course they run into plenty of trouble along the way, not just from dangerous wildlife, disease, and unfriendly natives, but also from a treacherous German expatriate with an agenda of his own. Luckily, they have help from a couple of highly capable Brazilian bushmen, Pedro and Lourenco (who star in a series of short stories also by Friel). Everything comes to a satisfactory conclusion, but not before several plot twists and an epic battle between tribes of natives.

Friel was an adventurer and explorer himself, and it shows in his vivid, authentic writing. I'm no expert on South American jungles, mind you, but everything in THE PATHLESS TRAIL rings true to me. And if it's not, then Friel did a really good job of making it seem that way. There's also a considerable amount of humor in the novel, especially early on, and McKay, Knowlton, and Ryan are very likable heroes, if a little stereotypical. They appear in three more novels by Friel. I have the second one, TIGER RIVER, and will read it at some point. The other two, THE KING OF NO MAN'S LAND and MOUNTAINS OF MYSTERY, are harder to find and more expensive. We'll have to see about them later. 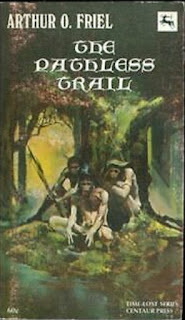 After being serialized in ADVENTURE, THE PATHLESS TRAIL was published in hardback by Grosset & Dunlap in 1923. There was a paperback edition from Centaur Books in 1969. Today, various POD and e-book editions are available. I enjoyed it quite a bit, and if you're in the mood for some good adventure fiction, I think it's well worth reading.
Posted by James Reasoner at 4:00 AM

I read this years ago and it lead to reading a few other Friel novels. All were good but Pathless Trail was by far my favorite.

You should grab the AMAZON NIGHTS collection from WildSide Press.

I love those Pedro & Lourenco stories. Robert E. Howard read Friel. I suspect he was a direct influence on a few matters.

The audio book is excellent, too.

I have AMAZON NIGHTS and liked the characters in this one, so I'm sure I'll get around to it.

Stereotypical characters: Knowlton = English, McKay = Scottish, Ryan = Irish. And the Irishman is the non-com. I've got this on my to-do plate as well. The readers of Adventure in the teens and '20s( at least a large percentage of them) were very anti-British and wrote to magazine, specifically giving Talbot Mundy a hard time about his Up and Down the Earth series, starring three Englishmen and an American led by Monty{ the Earl of Montdidier and Kirkcudbright}. This probably led to the early termination of this series at The Eye of Zeitoon, So he started Jimgrim, an American working with the British inPalestine.

I didn't know about the anti-British sentiment in ADVENTURE. I haven't read any of that Up and Down the Earth series by Mundy. I keep thinking I'm going to dig a lot deeper into his work, but I can't quite seem to get around to it.