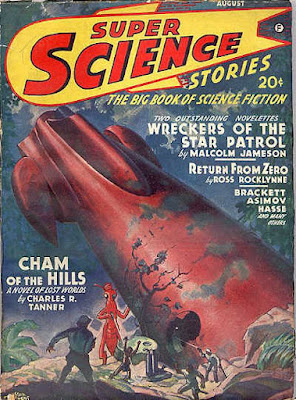 A down-on-his-luck ship’s captain winds up taking a job as first mate on a tramp steamer carrying a valuable cargo, only to find himself involved in a scheme to wreck the ship for the insurance money . . .

Wait a minute. That’s the sort of nautical adventure yarn H. Bedford-Jones would have written for ARGOSY or SHORT STORIES. “Wreckers of the Star Patrol” by Malcolm Jameson, a novelette that appeared originally in the August 1942 issue of SUPER SCIENCE STORIES, is completely different. It’s about a down-on-his-luck spaceship captain who winds up taking a job as first mate on a tramp spaceship carrying a valuable cargo, only to find himself involved in a scheme to wreck the spaceship for the insurance money.

I’m sorry. I’m being too snarky here, and “Wreckers of the Star Patrol” doesn’t deserve it because I actually did enjoy this pulp science fiction yarn. The Bedford-Jones-like plot only takes up about the first half of it. Then it becomes a Space Western for a while, as the hero becomes a cowboy of sorts herding native fauna on another planet, riding a sort of small, winged dinosaur instead of a horse. And then, suddenly (here comes the kitchen sink), evil aliens invade! This gives the hero the chance to meet up again with the villains responsible for his previous dilemma and get his revenge on them.

Honestly, “Wreckers of the Star Patrol” isn’t very good. For one thing, there’s no Star Patrol in it, not even a mention. It’s a collection of standard pulp adventure elements dressed up with science fiction trappings. Characterization is almost non-existent. But, as I said above, I did enjoy it, mostly for the head-long pace and some good action scenes and dialogue. This is the first thing I’ve read by Malcolm Jameson. He sold quite a few stories to John W. Campbell for ASTOUNDING and UNKNOWN and I’m inclined to try some of them because he clearly wasn’t without talent. I think this one is just a reject sold to a salvage market, and even at that, I would have loved it when I was ten years old. I have no trouble putting myself in that mindset, and if you can do the same, you might like it, too.

Jameson's best work is in his Bullard of the Space Patrol stories. And, yes, there IS an actual Space Patrol involved.

I've not read Jameson except maybe a story in an anthology or two, but I don't recall any particular titles. From what I understand from his reputation, he was a midlist pulp writer who did some good stuff. And considering that Asimov and Brackett are both listed on the cover of that pulp, as well as Rocklynne, I personally wouldn't be too hard on Jameson.

Or to put it another way, he is a writer I would be willing to read.

I have those Bullard of the Space Patrol stories and hope to get around to reading them relatively soon.

Cube from Space by Leigh Brackett was reprinted in Martian Quest by Haffner Press. Not a bad early story by her.

Frederik Pohl, founding editor of SSS, was happy to get the Jameson stories he was able to publish, and made a point of mentioning in his memoirs how pretty his daughter was.

There are a few pictures of Vida Jameson, Malcolm Jameson's daughter, here:

She does appear to have been an attractive young woman.