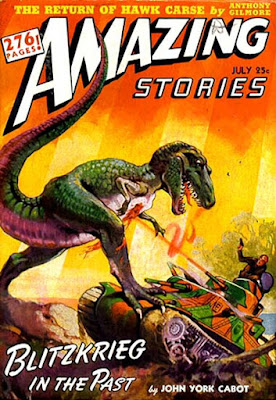 David Wright O’Brien’s novella “Squadron of the Damned” appeared in the July 1942 issue of AMAZING STORIES, the same issue that included “Blitzkrieg in the Past”, also written by O’Brien under his John York Cabot pseudonym. Over the years I’ve read numerous comments about how some early science fiction stories are just Westerns transplanted into space. Well, “Squadron of the Damned” is very much a French Foreign Legion yarn set in space. Which didn’t lessen my enjoyment of it one bit.

The protagonist, Ricky Werts, joins the Outer Space Patrol Legion in order to track down his missing brother, who was supposedly killed in a spaceship wreck while fleeing a murder charge. Ricky believes his brother Clark is not only innocent, he’s also still alive, and Ricky thinks it’s likely Clark has tried to disappear into the ranks of the Legion, which is engaged in a war with invaders from outside the solar system.

This story also has a lot in common with some of the military SF being published today. We get some training scenes, some camaraderie between Ricky and his fellow Legionnaires (as well as making some enemies among them), and several big space battles, along with the resolution of Ricky’s quest to find his brother and clear his name. The difference is that O’Brien takes around 20,000 words to do this, while a book with the same plot today could run to 150,000 words, easily.

I think I prefer O’Brien’s version. The science may be pretty iffy in places, even for 1942, but he keeps things moving along very nicely and has an enjoyable style. I find it interesting that the space fighters used by the Legion are described much like American B-17 bombers. I don’t know exactly when O’Brien enlisted in the Army Air Corps, but I wonder if he already had some familiarity with B-17s at the time he wrote this story. (He was a crewman in a B-17 when he was killed in a bombing raid over Berlin in 1944.)

“Squadron of the Damned” is a good pulp adventure yarn, not a classic of the SF genre by any means but still a very entertaining story. I’ll definitely be reading more by O’Brien.

This sounds really fun. Heck, I also want to read the cover story, but I found O'Brien's story on Kobo: https://www.kobo.com/us/en/ebook/squadron-of-the-damned. Think I'll give it a try, mainly to see how he does in 20K words what would take 150K nowadays. That's spot on. Sigh. They don't write 'em like they used to.

I’ve got this issue, which I bought because of the dinosaur/tank story. I’ll have to get it out and read the rest of the magazine. The reason reason I looked for the dinosaur story was that a retired priest at my church was telling me about something he read when he was a youngster that involved dinosaurs, soldiers, and tanks in a desert setting. I found this and lent him the magazine. He said he enjoyed it, but it was a different story from the one he saw all those years back.

Sounds like a good one. I imagine there were plenty of news and information articles about equipment and vehicles and training as the war effort was ramping up.