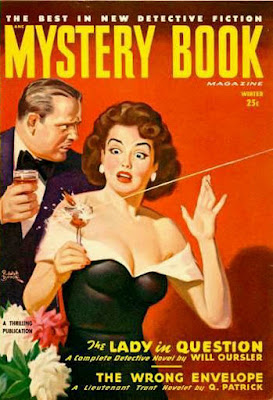 For some reason, I like this cover. The colors are eye-catching, the couple seem so suave and sophisticated, and yet there's the element of action with the bullet shattering the glass. I guess that's three reasons I like it, isn't it? Inside there's a Saint story by Leslie Charteris (one of my favorite series and authors), as well as stories by Q. Patrick (the guys who also wrote as Patrick Quentin, usually pretty good), Will Oursler (whose name is familiar to me, but I don't know why), O.B. Myers (who I think of as an aviation pulp author), and Leslie Gordon Barnard (who I never heard of). I'd read this issue just for the Saint story.
Posted by James Reasoner at 4:00 AM

Oursler was the son of Fulton Oursler (THE GREATEST STORY EVER TOLD, and -- as "Anthony Abbott" -- the Thatcher Colt mysteries) and the author of over forty books, including 12 mysteries. At one time he was vice-president of MWA. A competent author, but not a significant one.

Will Oursler edited the 1951 paperback, "As Tough as they Come." Blurb from the front cover: "17 Hard-Boiled stories of murder and violence by Hammett, Cain, Fisher, Pentecost and others." Also included are pulp stories from the likes of Bruno Fischer, Day Keene, Brett Halliday, and George Harmon Coxe.

Ah, so that's where I know Oursler's name.
As Tough as They Come is an excellent collection of hard-boiled yarns, and apparently pretty rare these days.
It leads off with Bruno Fisher's The Man Who Lost His Head, which is not only the best thing I've read from the author but an intense and seriously queasy story that I couldn't forget if I tried.
The Acknowledgements indicate that the story was copyright with Street & Smith in 1945 but I'm curious to know which of their pulps it originally appeared in as it's notably nastier than anything I recall reading from any of their mags of that era.

Bruno Fischer's, "The Man Who Lost His Head" first appeared in Doc Savage (July 1945). It was also reprinted in the digest, Verdict (July 1953).

Wow. Never would that thought that wincingly brutal story could have appeared in Doc Savage.

Thanks for the information, guys. I think I have a copy of AS TOUGH AS THEY COME, but I've never read it. Now I'll have to see if I do, because I want to read that Bruno Fischer story.

This version of MYSTERY BOOK seems, whenever I look at it, like it was a pretty impressive...the digest the title was beforehand was literarily impressive but not too much to look at, in a literal sense, while the pulp version had the Thrilling Group art department in place. Neither version seems to have commercially caught on, but it did run for about five years all told. I have some copies of digest issues somewhere.