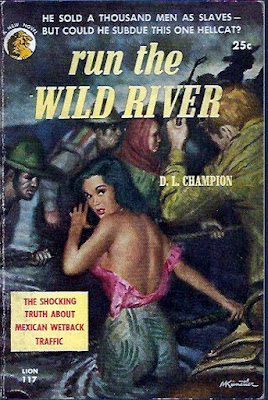 Sometimes you come across little gems in unexpected places. I’ve been reading D.L. Champion’s pulp work for decades, since he created one of my favorite characters, the Phantom Detective, and wrote many of the early novels in the pulp of that name. Until recently, though, I was unaware that he’d also written a hardboiled crime novel, RUN THE WILD RIVER, originally published in paperback by Lion Books in 1952, with a cover by Mort Kunstler. It’s being reprinted soon by Stark House Press as part of a triple volume of Lion Books. 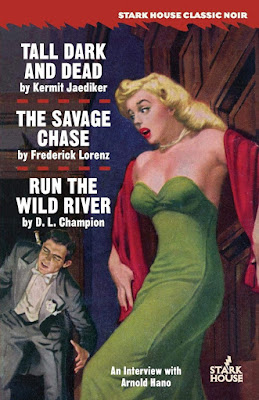 The plot of a heel’s rise to power in some criminal enterprise is a common one in hardboiled and noir fiction, and that’s what you get in RUN THE WILD RIVER. The narrator, Bill Ackroyd, is a heel, no doubt about that. A young grifter, he gets kicked out of both El Paso and Juarez and finds himself stranded in a small, seedy town on the Mexican side of the Rio Grande. But Bill is the kind of guy who always figures out a way to land on his feet, so before you know it he becomes a cog in a local smuggling network that takes Mexican laborers across the river and sells them into virtual slavery in Texas. Bill has his sights set on being more than a henchman, though—no matter who he has to double-cross or even kill to accomplish that goal. He even succeeds . . . but then a beautiful blonde shows up and brings with her the potential to wreck everything, as beautiful blondes usually do.

Champion’s many years of writing for the pulps taught him how to pace a story, that’s for sure. RUN THE WILD RIVER really races along, and Champion accomplishes the difficult task of making the reader care about, even root for, his protagonist, no matter how awful a person that protagonist is—and Bill Ackroyd’s pretty bad. The other characters also border on stereotypes, but Champion makes all of them interesting, too, and he does a fine job with the squalid settings.

I have to admit, I saw the big twist in the story coming as soon as Champion introduced it, and I also felt like the plot could have used yet one more twist at the end. But neither of those things detracted much from my enjoyment of this novel. I really enjoyed reading RUN THE WILD RIVER, and I sure wish Champion had continued writing books like this. However, this is the only one we’ve got, so if you’re a fan of hardboiled and noir crime fiction, I give it a high recommendation.

Posted by James Reasoner at 4:08 AM

Thanks for the tip, James. I'm adding it to my purchase list!

James, as promised, I bought this and read it and agree with your assessment. In many ways, it is an indictment of the horrible illegal immigration market that continues to this day, but wrapped up as an engrossing hard-boiled novel. You've been reading Champion for years, but this has been my introduction to him. Are you saying that as far as you know, this is the only stand-alone novel that Champion authored? Thanks again for the recommendation!

Steve,
Champion did a ton of stories for the pulps, breaking in with the Mr. Death series in THRILLING DETECTIVE, which was a dry run of sorts for THE PHANTOM DETECTIVE, a series he created and for which he supplied many of the early novels. He also wrote the highly regarded Inspector Allhoff and Rex Sackler series, which are being reprinted. But this is indeed his only stand-alone novel, as far as I've been able to determine. I just got the first volume of Sackler stories from Steeger Books and look forward to reading it.