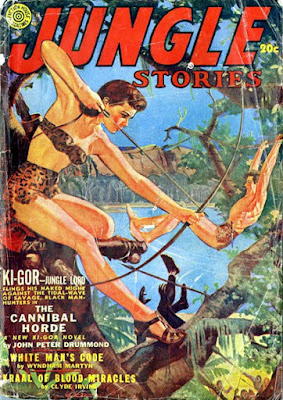 It had been a while since I read a Ki-Gor novel, so I figured it was time I got back to the series. “The Cannibal Horde”, originally published in the Fall 1942 issue of JUNGLE STORIES, is a bit of a letdown from the excellent yarn in the previous issue, “Blood Priestess of Vig N’Ga”. In this one, Ki-Gor and Helene are traveling with their friend Hurree Das, the Hindu doctor who appears occasionally as reluctant villain/comedy relief, when they find themselves in the middle of a war instigated by an old enemy of Ki-Gor’s from an earlier adventure. This would-be potentate has assembled an army of cannibals, aided by warriors from some other tribes, and is out to conquer a neighboring kingdom. Ki-Gor, of course, sets out to stop this.

That’s all there is to it, which results in kind of a thinly plotted tale. There are a few battles, a lot of running around, and a nicely suspenseful sequence toward the end when Helene is captured and seems destined to wind up in the cannibals’ stew pot. Ki-Gor is off-screen quite a bit. All in all, “The Cannibal Horde” is a little bit lackluster, but still a readable yarn.

As usual, we don’t know who was behind the John Peter Drummond house-name, but I got the feeling this story was by either an author who was new to the series or at least one who hadn’t contributed much to it. Hurree Das is the only member of the regular supporting cast to appear, and his characterization seems a little off to me. There’s no mention of Tembu George, N’Geeso, or Marmo the elephant.

This is the last story in the third and at least for the moment final collection of Ki-Gor stories from Altus Press. I don’t know if more collections are in the works, but I hope so. In the meantime, I have quite a few other novels from the series in various reprint editions, so I’ll be moving on with them and probably skipping around some instead of reading them in order. But I’ve really enjoyed reading the first fifteen stories like this and look forward to the rest of the series.

John Murray Reynolds wrote the first Ki-Gor story under his own name, then probably contributed some others to the series as John Peter Drummond, but it became a house-name pretty early in the magazine's run. Several writers have been connected to the series, such as Dan Cushman, Wilbur S. Peacock, and James McKimmey, but so far, we don't know who wrote which stories and probably never will.