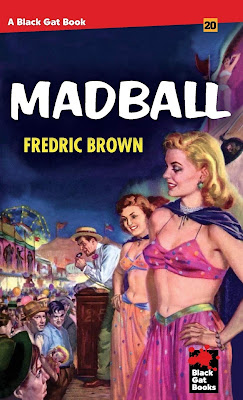 I have a fondness for novels and stories set in carnivals, circuses, and such traveling shows. Fredric Brown’s novel MADBALL, published originally in 1953 when his career was going along very well, fits quite nicely in this tradition. But as you’d expect, Brown throws a lot of curves into his tale, so you really don’t know what to expect.

In a way, MADBALL is also a caper novel, since the plot revolves around a bank robbery, but unlike most caper novels, the job has already taken place when the book opens. In fact, it occurred weeks earlier, when two guys from a traveling carnival rob a bank in one of the towns on the show’s circuit. They hide the loot somewhere among the various attractions, then promptly get involved in a car wreck that kills one of the thieves and causes the other one to be laid up for six weeks. But as soon as the survivor gets out of the hospital, he heads for the carnival to retrieve the stolen money. Unfortunately for him, he’s murdered almost as soon as he gets there (not a spoiler, this happens very early on), and the rest of the book consists of various parties searching for the loot, as well as the murderer (who is known to the reader almost from the start) trying to cover his tracks.

As usual with a Fredric Brown novel, the plot is suitably twisty, but the real appeal is in the fine writing and the compelling characters he creates. Brown was a carny himself at one time, and he knew this world very well, so we get a lot of carnival lore as well a shrewd fortune teller, an insanely jealous knife-thrower and his beautiful wife, assorted women of dubious virtue, a mentally challenged young man and various people who take advantage of him and try to use him for their own benefit, and a murderer who’s maybe not as clever as he thinks he is. Brown generates plenty of suspense as we read on to find out who’s going to get away their crimes and who’s going to wind up with the loot. But of course he has a few twists he waits until the end to spring . . .

Madball is another name for the crystal ball used by the fortune teller, and maybe it actually does predict the future. I can predict that a lot of you would enjoy the novel MADBALL. It’s about to be reprinted by Stark House in its Black Gat line, and I give it a high recommendation.

Thanks for the review. Brown is a favorite, and a Brown caper novel goes on the “must get” list.

I do love me some Fredric Brown, so thanks for the heads-up, James!

Madball is a terrific novel. Maybe my memory is shaky, but I thought the murderer was not revealed till near the end. Or maybe I'm just thick!

I've always wondered why this one came out as a PBO rather than in a hardbound edition.

The murderer's perspective is shown earlier on but his identity is not revealed until near the end.

Grim and wonderful and with a remarkable body count. As with many writers, I knew Brown only as an SF writer until the last decade or so. I first discovered the vast amount of other stuff when the film The Screaming Mimi (1958) passed my way. Then I realized that The Bird With the Crystal Plumage (1970) was from the same source and that source had written a lot more than I knew. This book is the one that prompted my generation of a new music playlist including Alex North's score to Carny along with a vast array of material by Elmer Bernstein, Jerry Goldsmith etc.